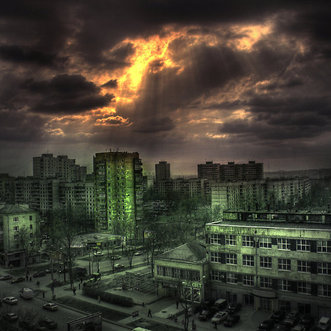 As the ozone layer disintegrates and the world prepares for certain doom in "4:44 Last Day on Earth", man is left with just one question: 'to be or not to be?', to commit suicide or stay and watch?

There's an eerie calm on the Lower East side as residents wait for the end to come at 4:44 am the next morning. Last goodbyes are said by videophone, the Chinese takeaway man still delivers -- only one man jumps off his balcony.

Unlike Danish filmmaker Lars von Trier's film "Melancholia," which explores the same themes and was a strong contender at Cannes Film Festival this year, there is no despair, denial or outrage in Ferrara's movie.

"One of the big questions is why isn't there more anger at the end," Ferrara said in an interview at one of the Lido island's luxury beach hotels ahead of the screening.

"We talked about images of destruction. But... there's disbelief, there's anger and in the end there's acceptance. Once you believe it's the end, what can you really do? Are you going break a window and steal a television set?

"I think people are going to go on with what they go on with," he said.

As the television presenter gives his last briefing -- "Al Gore was right. We didn't listen and now it's too late" -- Cisco, played by Willem Dafoe, and his young partner Skye, played by Shanyn Leigh, make love, eat and play.

While the spiritual Skye absorbs herself in painting to the strains of a debate on the existence of the physical world, Cisco struggles with a substance addiction and mulls over the choice between suicide and waiting for death.

"To be or not to be? It's 'to be', that's the answer," the director said. "Why are you going to kill yourself if the world is going to end at 4:44? You would have thought just out of curiosity you'd stick around."

But Ferrara's characters appear to lack any curiosity about the end. While television images show those with religious beliefs coming together to pray, individualism and banality reigns as humdrum existences are played out.

The time of the end of the world, 4:44, is a reference to the Chinese significance of the number four, which stands for death, Ferrara said. And if humanity does not act now, oblivion is coming, sooner or later, he added.

"Civilizations that are more advanced than ours have come crumbling down, so to think that what we have is beyond that, is earthquake proof, natural disaster proof or revolution proof, I think it's stupid," he said.

"We're responsible for the environment and the ozone. It begins in the mirror," he added, echoing the Dalai Lama's televised speech in the film urging humans to remember that "ultimately we are part of nature and its balance."

Though Dafoe -- of "The English patient" and "Spider Man" fame -- said the script did not "pop" for him the first time he read it, the issue of mortality in "4:44 Last Day on Earth" does have a personal resonance.

"I do think about my death all the time. Particularly around body functions and sex and eating, you know death is in the mix," he said.

"I'm a New Yorker, living down town, dealing with people -- some who have problems with substance abuse or sex or problems with work. They seek. Spirituality, or at least that kind of talk."

Having witnessed the end of Earth, Dafoe's next stop is Mars, where he appears in the guise of a warring "Barsoomian".

Playing a 10-foot tall, multi-armed Martian in the upcoming Pixar movie, "John Carter," had been a riot, he said. "I did the whole movie on stilts!"