U.S. Targets IS Training Camp in Iraq for First Time 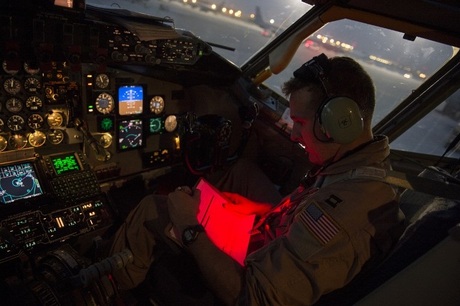 "In total, one air strike near an ISIL (Islamic State group) training camp southeast of Mosul destroyed an ISIL armed vehicle, two ISIL-occupied buildings and a large ISIL ground unit," the U.S. Central Command, which oversees American forces in the Middle East, said in a statement.

It was the first time U.S. aircraft had targeted a training camp since the air campaign began on August 8, a U.S. military officer, who spoke on condition of anonymity, told Agence France-Presse.

The air strikes, which involved both bombers and fighter jets, took place over the past 24 hours and "all aircraft exited the strike areas safely," it said.

U.S. warplanes have conducted 176 air strikes against the Sunni extremists since August 8, mostly in northern Iraq.

President Barack Obama has vowed a relentless campaign against the IS group, which has seized a large swath of territory in Syria and Iraq.

are you reporting from the front lines? you seem to be very confident with what you are reporting. You seem so frustrated that you are creating your own realities.

he is just a troll

Do u have anything to do in life other than comment on this website? Do u have job or are u paid to do this? Honestly I am shocked at the amount of time you have to spare to make snipy comments at articles and/or peoples' views other than if that was in fact ur job.

HA will protect the Cristhians of Lebanon, don't be worried about that "t.p"

Maybe Qatar was waiting for Iran to hit IS first?

Of course since Assad isn't included in the coalition, these bombings are staged. Great reporting from the front lines Flamer.

he is an embedded troll with no life or purpose