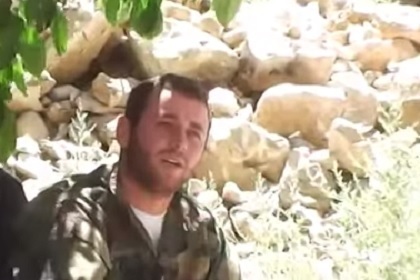 The Qaida-linked al-Nusra Front on Friday said it executed captive Lebanese soldier Mohammed Hamiyeh, describing him as the “victim of the Lebanese army's intransigence.”

Turkey's state-run Anatolia news agency said it received a phone call from a Nusra leader in Syria's Qalamun, who confirmed that the group murdered Hamiyeh with several bullets.

“After the operation that the Lebanese army and the Iranian party (Hizbullah) fabricated today with the aim of impeding the negotiations and after (the army's) arrest of civilians in Arsal and shelling of Qalamun's mountains, the time has come,” the Front's Qalamun branch threatened earlier in a tweet.

It was referring to a bomb attack that killed two Lebanese troops and wounded three others earlier in the day in the Bekaa border town of Arsal.

“Mohammed Hamiyeh is the first victim of the intransigence of the Lebanese army, which has become a puppet in the hand of the Iranian party,” it added.

Muslim scholars had urged al-Nusra not to carry out the execution, according to MTV.

The Front had first threatened to kill Hamiyeh on Tuesday over what it called the army's “persecution” of Syrian refugees and “procrastination” in the negotiations between the group and Lebanese authorities.

Along with the text of Tuesday's statement, the group published a photoshopped image showing Hamiyeh in a black casket.

Hamiyeh was among nine Lebanese security personnel who featured in a video posted by the Front on August 23, in which he was the only one donning army fatigues as the rest appeared in Internal Security Forces uniforms.

The troops were abducted during deadly clashes in early August between the army and Nusra and Islamic State gunmen in and around Arsal.

Nineteen troops were killed in the fighting as 35 soldiers and policemen were taken hostage. The Front later released seven security personnel who were in its custody while the IS has executed two army troops.

Ok FSA-Nusra, try laying a finger on these soldiers and see what happens.

Ya karim
They already did

M11er
I fully agree with you
May they all rot in hell
RIP Hamiey. May God give his family the strength to go thru this ordeal

@coolmec
With all dues respect, it was HA who brought this upon us by engaging on behalf of the Syrian regime instead of abiding by the Ba'abda declaration. If HA were to openly engage now, Lebanon risks a civil war between Sunnites and Shiites.
Best solution is what we have been calling for for ever it seems. HA should hand its weapons to the LAF as well as integrate its professional fighters into the LAF.
Enough of this HA charade being the protectors of Lebanon, they are not. Persisting on this path is certain to lead to the above mentioned Sunni vs. Shia civil war in Lebanon. The writing is on the wall for all to see. Will they?

Lebnanfirst
your comment above is idealistic Let's face reality HA will not disarm. I am no HA supporter by all means but I see it as the only viable force that could evict all Syrian refugees from Lebanon.
As far as I am concerned the Syrian presence in Lebanon is an existentialist threat to Lebanon. Add to that about 700,000 Syrian women delivering Syrian babies in Lebanon and add to that that the strife I Syrian will last for quite a few years.
End result The Syrian people took over Lebanon in a peaceful way that is what Hafez and Bachar assad failed to conquer Lebanon by war.
So if you keep all these Syrian refugees in Lebanon. The country is doomed

@coolmec
I understand your views and been reading this forum for a while now so I also know where you stand my friend. No disagreement there.
Also, I am anything but an idealist. That HA will voluntarily hand over its arms is not in contention, they will not. That said, faced with an existential threat, rational organizations always opt for the lesser of two evils. I absolutely abhor HA and consider their theocratic philosophy anathema to most Lebanese - no less so than that of those savages that call themselves ISIS. Regardless of how one may feel about HA/Iran, one must also recognize that they are more rational than the likes of ISIS and Iran has shown pragmatism albeit after being squeezed by the West.

M11er
I am not optimistic at all about our army's capabilities be it offensive or defensive. So far I have only seen or heard empty talks alas!!

@M11er
I share your view as expressed above. I think the US is planning. Pincer movement against ISIS such that pressure will be applied from Iraq in the noeth-east and Lebanon in the south-west. If it were to happen, the only outlets left for ISIS/Nusra is the Syrian and Turkish borders.
One can assume the Turks are capable of defending themselves (if they really mean it) while the Assad regime will find itself cornered at which time The US will lay down its demand for Assad to go as the price for blocking and helping to repel ISIS/Nusra's exit. They successfully did that in Iraq and got rid of Maliki.
I don't believe HA is capable of winning against ISIS if only because ISIS is way more, aggressive, brutal and savage than HA.

Not so @coolmec. The LAF's performance in Nahr El Bared with what little armaments available to them at the time was, and is, admirable.
This time around, the West is prepared to arm them against the savage and brutal ISIS especially if Obama sticks to his guns about no boots on the ground. Some other boots will have to do the job as there are no other options for securing victory but to have land forces secure liberated lands.
Mind you, have no illusion that the West will be doing it لعيوننا. Self interest no more no less.

lebnanfirst
you are living in a dream world
first the army's performance was dismal at best in nahr el Nared. far from admirable. It was rather embarrassing. It took too many days and lost too many men while they were encircling that camp... so
As much as I love Lebanon and support our army but we have to recognize our army is weak poorly organized and poorly trained
add to that our corrupt politicians who do not even provide it the political support it needs. Add to that our divided society
All I can say Pity the country pity the Lebanese
My heart goes out for that

M11, from where did you get that nonsence about pregnant women? Lol. The lebanese army commited many crimes during the nahr el bered battle including humiliating women, stealing from its residents, killing and destroyed the entire camp, what wasent destroyed of furniture and belongings, they stole. Hardly something to be proud of. They did not give a damn about innocents and instead took out a revenge campaign on them for something they had nothing to do with. That is not something tonbe expected from a army.

this is beyond imagination !!! everyone is sitting and waiting for them to butcher our soldiers one by one . Why done we do the same ? grab a couple of Nusra or ISIS , wear masks and start executing them slowly . Stupid , arrogant politicians sitting on their fat asses with no compromise to get the country out of this mess and at least elect a goddamn president

i blame Aoun and Samir Geagea for this stalemate we are in . Gentlemen , why dont you meet and solve this problem ?

Aoun is the cause of problems for all the Christians and lebanon since 1990 .

Sorry Kataebi
they are too busy amassing stealing money that is more important for them. May I add they excell at that

These Muslim scholars are useless when it comes to these SOB, these nusra, isis or whatever they call themselves are not muslims.

City boy
Even animals are better than them

I was thinking the same thing @cityboy, exactly the same. Some times I feel we are the same person with 2 different screen names

The families of the soldiers and the majority of the Lebanese who support the Army will lose their patience sooner or later. When they do, no one will be able to restrain them and things will go out of control.

The Texas Nusra Rangers are at it again.

The Nusra has just added itself to ISIL and the Syrian regime as the enemy.

anonymetexasusa: why not executing 10 for every Lebanese Army soldier they kill. There are plenty of them in Roumieh. Why keep feeding them?

when the lebanese army acts as a pawn for HA and openly assists HA, it opens itself to retaliation. The root cause here is HA and its actions in Syria.

Gentlemen,
It is a pleasure to read your posts where you all mostly agree with one another. The Lebanon I fell in love with over a decade ago seems to be uniting together for a common purpose. All politics aside, you mourn the loss of a defender of your beautiful nation and expect revenge. While I understand why the US doesn't want "boots on the ground", it is going to be up to countries in the ME to eradicate ISIS and Al Nusra in physical battle. Under the Arab League; countries in the ME have to commit at least 5,000 troops each to secure Lebanese borders with or without the consent of Hizthrowup. Iraqi forces with Kurdish forces can drive them into Syria and secure the border with assistance from the AL forces. Deny them a Caliphate! Al Nusra will have to battle them for territory within Syria. Let them kill each other. Lebanon has been through enough. Time to stand up and unite a wonderful country with a distinct culture. Peace be with Lebanon.

Tex get outta here with that zio proganda shit they want the whole land stop it youre embarrassing. Ma fi peace deals and abbas is a stooge to waste time while tey huild their settlements. Meanwhile gegaea is playing their game in leb. Enough of all thse traitors need to be hung including jayjay the traitor