Libya's Revolutionary Leader Says State to be Based on Sharia Law 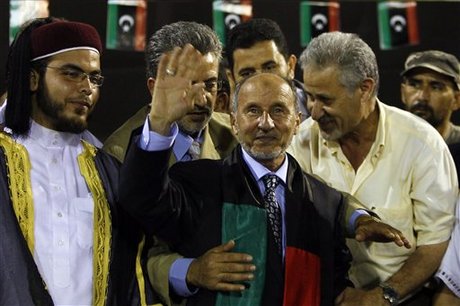 The chief of Libya's revolutionary movement told thousands of cheering Libyans in Tripoli Monday to strive for a civil, democratic state, while loyalists of the hunted dictator Moammar Gadhafi killed at least 15 opposition fighters in an attack on a key oil town in Libya's east.

From hiding, Gadhafi urged his remaining followers to keep up the fight, a sign that Libya's six-month civil is not over even though revolutionary forces now control most of the country and have begun setting up a new government in the capital.

Mustafa Abdul-Jalil addressed a rowdy crowd of thousands in Martyr's Square in central Tripoli, a site that until recently was famous for pro-Gadhafi rallies. Flanked by a few dozen revolutionary leaders in their largest public gathering since rebel forces stormed into the capital on Aug. 21, he called on Libyans to build a state based on the rule of law.

"No retribution, no taking matters into your own hands and no oppression. I hope that the revolution will not stumble because of any of these things," he said.

As he spoke, thousands waved flags, cheered and chanted, "Hold your head high, you're a free Libyan!" Some wept openly as fireworks exploded overhead.

Abdul-Jalil heads the National Transitional Council, founded in the eastern city of Benghazi early in the six-month civil war to guide the rebel movement. Its leaders have been arriving in the capital since it fell into rebel hands last month to start building a new government.

Abdul-Jalil, who served as Gadhafi's justice minister before joining the rebels at the uprising's start, defined the government he says the NTC hopes to create.

He also thanked NATO, the United States and a number of Arab and European countries for their aid to the rebels during the war. NATO bombed Gadhafi's military under a U.N. mandate to protect civilians, giving rebel forces an edge on Gadhafi's better armed and trained soldiers.

Abdul-Jalil said the new Libya would focus on youth and women, adding that some ministries and embassies would be headed by women. Some have criticized the rebel movement for not putting women in leadership roles, and none stood on stage with the movement's leaders.

This didn't bother some in the crowd.

"God willing, all he said will come true," said Sabriya Mohammed, 50, who came to the rally with her two adult daughters. "He mentioned women specifically and said we'd have our place. He's a man who knows the importance of the law."

Libya's new leaders face the huge challenge of building a new government in a country with no recent history of democracy or independent civil institutions. They also have yet to extend their control over all of Libya.

From hiding, Gadhafi called on his remaining followers Monday to keep fighting.

"We will not be ruled after we were the masters," said the brief statement attributed to Gadhafi that was read on Syria's Al-Rai TV by its owner Mishan al-Jabouri, a former Iraqi lawmaker and Gadhafi supporter.

The message described Libya's new leaders as "traitors" who are willing to turn over the country's oil riches to foreign interests.

"We will not hand Libya to colonialism, once again, as the traitors want," said the statement, which pledged to fight against the "coup."

Gadhafi's whereabouts are unknown, but his followers claim he is still in Libya. Some of his family members have fled to neighboring Algeria and others to Niger, most recently his son al-Saadi.