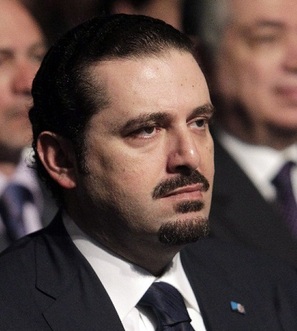 Head of the Mustaqbal Movement MP Saad Hariri criticized on Sunday the Syrian National Coalition's complaint to the United Nations Security Council over the Lebanese army's treatment of Syrian refugees in the northeastern region of Arsal, deeming it as a “misstep” and saying that it disregards the ties between the Lebanese and Syrian people.

He said in a statement: “The Syrian National Coalition has the right to defend the refugees' humanitarian rights … but the interests of the refugees and Syrian revolt also requires them to raise their voice and demand the release of the Lebanese soldiers and policemen abducted by Islamists in August.”

The former premier acknowledged that the Syrian refugees are suffering from oppression and displacement, adding that the Lebanese people have not wavered in supporting the Syrian revolution.

“It pains them to see that some sides among the revolutionaries have chosen the path of terrorism in order to harm Lebanese-Syrian ties, abducted the troops, and threatened civil peace,” he lamented.

“The photographs of the army's raid on Syrian encampments in Arsal were damaging and unacceptable. They should not be repeated or serve as an example of the ties between Lebanese ad Syrians,” he added.

“On the contrary, the images caused incitement that we could do without at this current stage,” Hariri stressed.

“This does not however deny the reality that the Lebanese military is forced to act under the threat of the armed groups that are gambling with the lives of the abducted soldiers and policemen,” he said.

“The gunmen are using the Syrian encampments to pressure the government and Lebanese state to achieve their goals,” explained head of the Mustaqbal Movement.

As much as it is the right of the Syrian National Coalition to defend the rights of the refugees, it should also demand the release of the Lebanese hostages, he continued, while noting that the coalition's complaint did not mention the kidnapping.

This issue should be a fundamental affair in maintaining the rights and protecting the refugees, he stated.

“Our position on the rights of the Syrian people will not waver in the face of a statement here or there,” Hariri emphasized.

“Our position is based on a firm conviction that the hefty prices our Syrian brothers are paying to obtain their freedom should not go to waste. Victory will be achieved no matter how long it takes,” he declared.

The army arrested on Thursday suspected terrorists during raids it carried out on Syrian refugee encampments and residences in Arsal and the northern city of Tripoli.

One assailant was killed and several others were injured when the army opened fire on them in Arsal for setting fire to tents in refugee encampments, said the army.

The military arrested scores of Syrians and Lebanese, including four gunmen belonging to al-Nusra Front.

A high-ranking source told al-Mustaqbal daily Sunday that the Syrian National Coalition submitted a complaint to the U.N. Security Council over the “Lebanese army's violations of human rights of the refugees during the Arsal raid.”

“It requested that it study the possibility of sending monitors to the encampments in Lebanon,” he revealed.

Arsal has been the battlefront of the Lebanese army in its fight with jihadists since they crossed the border from Syria and overran the town in early August. The militants from al-Nusra Front and the IS kidnapped troops during their withdrawal.

Several soldiers and policemen remain in captivity while three have been executed.

Thank God for the patriotic stances of Hariri. Imagine if the leader of Lebanon's Sunnis was some extremist medieval sheikh.- like the leader of shia for example.

HA is the reason we are in this mess to start with. First you threaten Hariri's life force him out of the country, then you stick your fingers in the Syrian pie for Sectarian reasons.
If only the Shia has a similar leader Lebanon would have been much better off

I agree, but some are more worhtless than others. Some are impeding the emergence of a strong state and army (because they are armed and use brute force) more than others.

Southern. U got a point. But also, If Nasrallah had some dignity, he must cut all ties with Assad the terrorist in chief, openly and forever.

But wait... is this his decision to make?

He looks stoned in this photo, LOL.

Karim
I think he looks rather hungover

Either you have a fertile imagination beyond reality or you are the biggest bigot that ever existed. how on earth can you come up with such accusations without providing any supporting evidence. next time please shut up and respect your politicians!

SHN's stance on the soldiers is good. I agree about his last speech. However, his mistake was to import Syria's problems to leb. But hey. he didnt have a choice. It was this or his supply lines would be cut.

SHN's stance on the soldiers was good but it came after many weeks of warnings not to negotiate by Raad, Hajj Hassan, Mohammad Fnesh and Ibrahim Amine editorials.

Southern at some point you must recognize that assad regime is a tyrannic regime and responsible of mass killing of innocent civilians. Unfortunately a moderate progressist opposition which could have led syria towards a better future could not arise and was confiscated by islamists and terrorists.

oh don't you worry he and they all realize the tyranny of the regime and HA. But they were raised on hatred and choose to ignore and in fact enjoy it.

I have more respect for Hariri now that he is defending Lebanon and not siding with the killers/cowards, Terrorists, etc....

It is a shame to read such filthy comments pointed at each other. Jesus said to love each other. WWJD?

We should give up Tripoli, Akkar, and Beqaa to Syria.