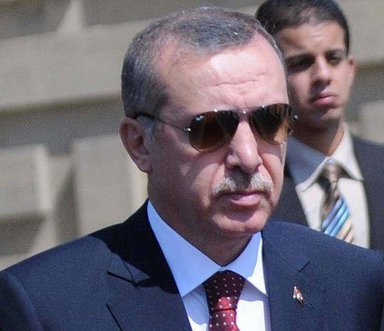 Turkish Prime Minister Recep Tayyip Erdogan, a fervent critic of Israel, said in Egypt Tuesday recognition of a Palestinian state is not an option but an "obligation."

Addressing Arab foreign ministers as he kicked off a three-nation Arab Spring tour, the Turkish premier also said governments should not use force to repress the legitimate demands of their people.

And he reiterated that strained ties with Israel will not improve unless the Jewish state apologizes over the death of nine Turks killed in a raid on an aid flotilla that tried to break the Israeli-imposed blockade of Gaza.

"Recognizing the Palestinian state is not an option, it is an obligation," Erdogan said at Arab League headquarters in Cairo, as the Palestinians seek support for a U.N. membership bid they plan to launch next week.

The Palestinians are preparing to submit a formal request to become the 194th member of the United Nations when the General Assembly begins its meetings on September 20, despite U.S. and Israeli opposition.

The Palestinian bid has triggered controversy.

U.S. President Barack Obama on Monday said it was a "distraction" that would not result in viable statehood while Russia said it will back the Palestinians as the European Union remains divided.

Late on Monday, a small group of Arab foreign ministers led by Qatar's top diplomat agreed to marshal support for the Palestinian bid.

"We thank all the countries that have recognized the Palestinian state and we look forward to (further) support for the Palestinian bid for U.N. membership," Sheikh Hamad said.

Some 127 countries recognized Palestine as an independent state and the Palestinians hope to garner more than 160 votes at the General Assembly for their cause and would not spare an effort to seek full U.N. membership.

Erdogan, a staunch supporter of the Palestinian cause who has become a strident critic of longtime ally Israel, said Turkey and the Arabs must "work hand in hand with our Palestinian brothers."

"The Palestinian cause is the cause of human dignity," said Erdogan.

Turning to Israel, Erdogan said: "It is out of the question for Turkey to normalize ties with Israel" unless it apologizes for last year's deadly flotilla raid, pays compensation and lifts a blockade imposed on Gaza.

"Israel sees itself above the law," he said, accusing the Jewish state of "turning a deaf ear" to Turkey's demands.

Earlier this month Ankara expelled the Israeli ambassador and suspended all military ties and defense trade over Israel's refusal to apologize for the flotilla raid, in which nine Turks were killed.

Much admired on the Arab street, Erdogan is on an Arab Spring tour of Egypt, Tunisia and Libya where pro-democracy uprisings unseated veteran autocratic leaders.

About 3,000 people greeted him at Cairo airport when he arrived late Monday with his wife, children, six cabinet ministers and a huge business delegation to bolster ties with the most populous Arab nation.

On Tuesday he said at the Arab League that "the legitimate demands of the people cannot be repressed with force and in blood," in reference to the uprisings that swept Tunisia, Egypt and Libya and continue to rock Syria.

"Freedom and democracy and human rights must be a united slogan for the future of our people," he said.

Erdogan's visit to Cairo is his first since the ouster of veteran president Hosni Mubarak in February and he was to meet some of the young activists who spearheaded the popular uprising as well as the new authorities.

See our recent post on Edogan and Egypt and how Wallstreet uses them: