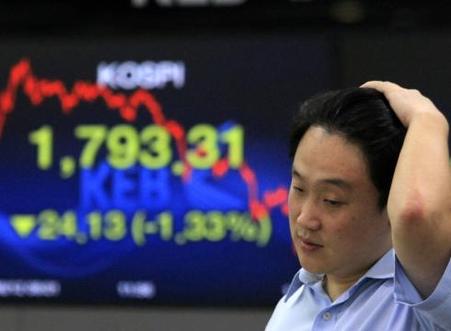 Asian stock markets fell Wednesday despite gains on Wall Street and in Europe the day before as simmering worries over Europe's debt crisis cast a pall over trading.

Markets have been going through wild swings amid worries over whether Greece may default, a development that could reverberate through other troubled European economies such as Italy's as well as damage the region's banking system.

Investors in Europe and the U.S. took a measure of relief, however, after signs Tuesday that European leaders would do what it takes to avoid such a scenario.

Asian investors, however, remained cautious about the outlook for any marked improvement in Europe's sovereign debt woes.

"There is no signal to show the crisis will end," said Castor Pang, Hong Kong-based head of research at Core Pacific-Yamaichi, a Taiwan brokerage. "That's why most of the investors are becoming more and more pessimistic."

Property shares were hurt as investors continued to fret over possible credit tightening by China's central bank to counter inflation, which is hovering near three-year highs.

Benchmark oil for October delivery was down $1.44 to $88.77 per barrel in electronic trading on the New York Mercantile Exchange. The contract rose $2.02 to end at $90.21 per barrel on the Nymex on Tuesday.

In London, Brent crude for October delivery was down 60 cents at $111.29 on the ICE Futures exchange.