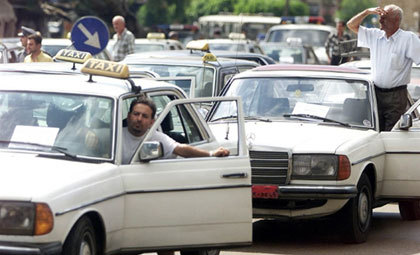 The drivers’ union suspended its nationwide strike that was scheduled to be held on Thursday after reaching a late-night deal with Prime Minister Najib Miqati for the finance ministry to begin receiving the requests of fuel subsidy payments starting Monday.

The strike was aimed at protesting the government’s failure to deliver on a monthly LL400,000 fuel subsidy promised in May. Public drivers were seeking to hold the strike between 6:00 am and 12:00 pm.

“The meeting was positive and was dominated by the spirit of cooperation and responsibility,” Miqati told As Safir daily about talks he held with union representatives Bassam Tlais and Abdul Amir Najde.

“Eventually, we reached an agreement on the suspension of the strike,” he said.

However, the payments will be only executed after parliament approves a draft law on the issue. Miqati told Tlais and Najde that Speaker Nabih Berri has promised him that parliament would discuss the draft law within a month.

The cabinet, meanwhile, agreed on Wednesday to put the transportation issue on the agenda of its next session. Ministerial sources told An Nahar daily that discussions during the government meeting focused on the “illegal” fuel subsidy decision taken by former Premier Saad Hariri’s caretaking cabinet.

The sources also told As Safir newspaper that the ministers were divided on how to meet the drivers’ demands. Mainly Change and Reform bloc members argued that the agreement reached in May wasn’t appropriate and the government should stabilize the price of gasoline instead.

Other ministers said the current cabinet should not back off from the deal given that President Michel Suleiman, Hariri and Miqati participated in reaching the agreement with drivers.

However, the ministers later approved the subsidy on condition of a parliamentary adoption of the draft law.

Damn, that was too easy. So if we start road blockades and demand public toilets, we'll obtain them? The way forward isn't with 'service' and taxis... it's train, tramway and metro from tripoli to tyre.