No Short Skirts, no Making Out in Class in Bulgarian Schools 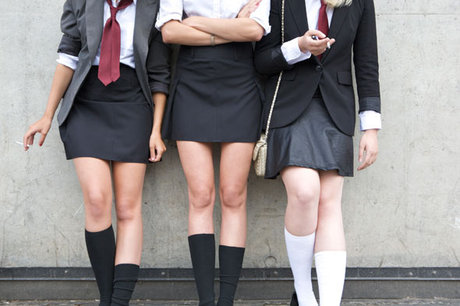 Bulgarian schools, where strict discipline reigned until the fall of communism, are starting to reintroduce decency rules as clothes grow skimpier and teenagers increasingly make out in hallways.

"Students must not exhibit intimate behavior during lessons, nor in the school," according to the regulations of one Sofia high school, cited by the daily 24 hours Thursday on the first day of the new school year.

A similar paragraph was also included in the rulebook in a school in Shumen, in the northwest, the newspaper said.

"The younger pupils see the older ones going at it in the hallways, that is not right," said principal Neli Kostova of Clement d'Ohrid high school in Sofia.

The rules of that establishment forbid students from wearing "dangerous shoes, including roller skates and shoes with spikes."

Many schools around the country have also reintroduced uniforms.

Under communism, strict discipline was enforced and all pupils had to wear a black-and-white uniform and short hair. But the fall of the regime in 1989 put an end to all that.

Now, boys with piercings and girls with low-cut décolleté, extravagant jewelry and visible underwear are a common sight even in elite schools.

"It's difficult to get the attention of the boys in the classroom when next to them, the girls are exposing their breasts and navel," Tsvetana Georgieva, a German teacher, told Agence France Presse, calling for "a minimum of decency."

The Vasil Levski high school in northwestern Vidin has now ruled that "skirts must be no shorter than 10 centimeters (four inches) above the knee, heels should not be higher than four centimeters and tops should not go above the waist."

i bet it hard for the professor to concentrate as well :)