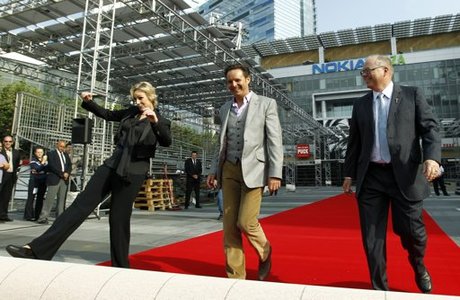 Jane Lynch didn't trip over the red carpet while rolling it out Wednesday morning in anticipation of Sunday's Emmy ceremony. Despite not seeing "daylight in a couple of days" and dreaming she might experience a "face plant" as the show's host, Lynch pulled it off without a hitch.

"I don't even know where I am anymore," she joked to dozens of photographers and reporters who gathered for the unveiling with the show's executive producer Mark Burnett and TV academy chairman John Shaffner.

For the fourth year, the show will be held at the Nokia Theatre in downtown Los Angeles. The 390-foot red carpet — more like a red sidewalk, really — will canvass the entire plaza across the street from the Staples Center.

After the show, Shaffner said the red carpet and the solar panels powering it will be donated to local charities.

"People will get to live on red carpet," he boasted.

She said the show will also star a chorus of singing TV actors who will introduce the award categories. They might melodically move the show along, too.

"If any of our winners go long, they'll be gently singing them off," promised Lynch.

Inside the Nokia Theatre, the sweeping set was coming together. On one side of the stage, an enormous Emmy statue was showered in glittering charms. On the other side, a raised platform was surrounded by multiple screens. At the center was a voluminous circular screen doubling as an entryway.

"It's a very big stage at the Nokia," said Burnett. "It feels important. I like the colors — reds and golds, warm tones that make you feel invited and positive. Then, you drop in great musical moments and fun. That's the tone and pace. There's too much to fit in."

Does that mean the show will go over its three-hour running time? "Hey, has it ever not?"

Place cards on the chairs in front of the stage's black-and-gold stairs illustrated that Hugh Laurie, Betty White and Chris Colfer will have the best seats in the house: front-row center.