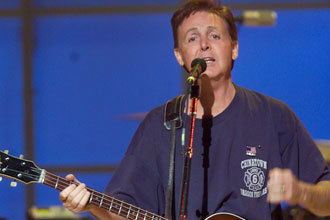 Former Beatle Paul McCartney could marry New York socialite Nancy Shevell at the same location he tied the knot with his first wife Linda, according to documents disclosed on Friday.

The 69-year-old pop legend has posted notice of his forthcoming marriage at an office for civil ceremonies in Marylebone, central London, where he wed for the first time in 1969.

Couples must give 16 days' notice of marriage, which means the couple could marry from next month.

The news suggests that the wedding will be a low-key affair, along similar lines to the Beatle's first marriage and in contrast to his second, lavish 2002 wedding ceremony in Ireland to former model Heather Mills.

McCartney and wealthy heiress Shevell began dating four years ago and announced in May that they were to get married.

According to the documents published Friday, Shevell began living at McCartney's home in the exclusive St John's Wood district of London earlier this month.

Linda McCartney, a photographer and animal rights campaigner, died from breast cancer in 1998 and the Beatles star then wed Mills in 2002 but their marriage ended in a bitter divorce six years later.

Mills was awarded £24.3 million (then $48 million, 30.8 million euros) in an accord finally hammered out after prolonged and acrimonious negotiations.

A spokesman for McCartney refused to comment about the forthcoming wedding.