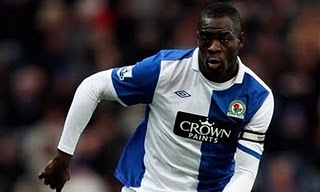 Blackburn skipper Chris Samba has vowed to make Ewood Park a "living hell" for Arsenal as the Gunners chase only their second victory of the season on Saturday.

Rovers have endured a miserable start to the season, failing to win any of their opening four games in a run that sees them firmly anchored to the bottom of the table with mounting pressure on boss Steve Kean.

However Samba is adamant Rovers position and results do not reflect their performance levels, and believes the club are well capable of upsetting Arsenal.

"It is a home game and it is up to us to make it a living hell for them when they come here," the Congolese defender said.

"It is simple, we must to do our best to make sure they don't play as they want to, make it horrible for them.

"We are so unlucky to be talking about this. With a bit of luck we would not be here, we would have four or five points and be in the middle of the table, comfortably.

"We have shown we can play good football but at the moment we are not winning.

"We do look like a good team and we just need a fraction to be a great team."

Blackburn's should have won their last home game, against Everton, when they missed two penalties and hit the woodwork twice before losing to a late penalty.

"Everton - I will not forget that game for a long time," Samba reflected.

"It was extraordinary, we dominated at both ends and it was looking like an easy game. To go out with nothing was frustrating, but that is football.

"A win would be very good, it would relieve a bit of pressure and all the talk but, from the past, you can see this is not the first time we have had something like this."