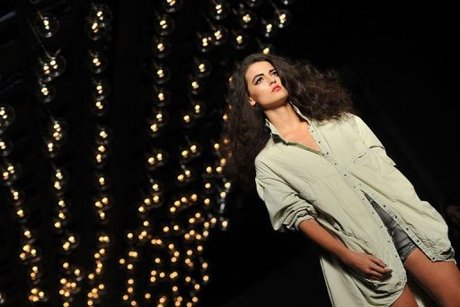 The spotlight turned to British fashion on Friday as London Fashion Week opened its doors only a day after the curtains went down on its sibling in New York.

In a year when British designers have taken center stage with the weddings of Kate Middleton and Kate Moss, London is determined to capitalize on the mood and prove it can compete on a global platform.

Opening the event at Somerset House in central London, London Mayor Boris Johnson highlighted the accolade recently bestowed on the city by a major U.S. consulting company as "the fashion capital of the world".

"That verdict is great news for our city and for our economy," Johnson said, adding that the industry contributes 80,000 jobs to London and £21 billion ($33 billion, 24 billion euros) to the British economy.

"If London's fashion business is helping young Londoners in this difficult time by taking them on... then together we can not only reduce youth unemployment... we can also be untapping untold riches of talent, and we would be lengthening London's lead as the fashion capital of the world," he said.

Harold Tilman, chairman of the British Fashion Council, said London, which is generally seen as the edgy but inferior relation to Paris and New York, was driving towards "global expansion", buoyed by royal success.

"What a year we have had, with the royal wedding, with the Duchess of Cambridge glowing in her Sarah Burton for McQueen (dress)," he told a crowd of fashion press and buyers.

But the focus was also on another big event for the British capital.

The latest London Fashion Week, which includes 100 catwalk shows and 200 exhibitions, showcases women's and menswear collections for spring-summer 2012, when London will be in the throes of hosting the Olympic Games

"As the whole country gears up for the Olympic year, the British Fashion Council has some very exciting plans," Tilman said, unveiling the Fashion 2012 project aimed at showcasing Britain's "creative excellence" and encouraging a new generation of fashionistas.

Joining him was a host of British Olympic athletes kitted out by home-grown designers.