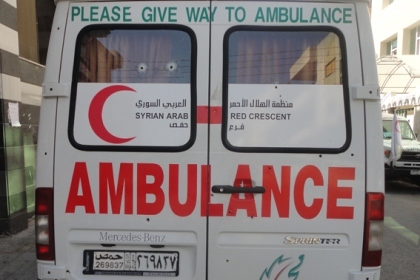 The international Red Cross on Friday condemned attacks on medical services in Syria, saying that relief workers and ambulances have come under fire on several occasions in the country.

"It is completely unacceptable that volunteers who are helping to save other people's lives end up losing their own," said Beatrice Megevand-Roggo, the International Committee of the Red Cross' head of operations for the Near and Middle East.

A Syrian Arab Red Crescent volunteer died this week from injuries sustained while performing his duties, noted the relief agency.

Two other volunteers were injured in the same incident, during which their ambulance was caught in heavy fire while transporting a wounded person to a hospital.

"This is not the first time Red Crescent personnel and vehicles have come under fire or been otherwise attacked since the onset of the recent violence in Syria," said the ICRC.

It urged all parties in the conflict to "respect and facilitate" Red Cross efforts to help those in need.

Thousands of Syrians have demonstrated daily for the past six months against the regime of President Bashar al-Assad, whose security forces have responded with violence, leaving some 2,600 people dead according to the U.N.

These people are really scumbags that desserve nothing but a rope round their necks. We know who is denying medical treatment to injured civilians, who is raiding hospitals looking for soft targets, impotent injured demonstrators on their hospital beds! Pffouu!! Let them go to hell! When they reach such a degree of bestiaity they only deserve an international tribunal , or better a firing squad!