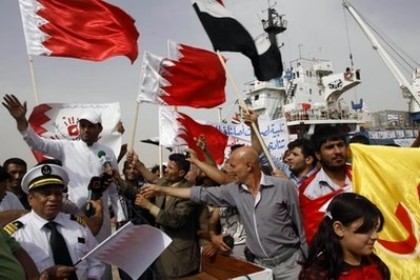 Bahraini security forces fired tear gas, rubber bullets and stun grenades Friday to disperse thousands of mourners at the funeral of a man who died after he himself was tear-gassed, a Shiite politician said.

"Security forces used tear gas, rubber bullets and stun grenades to disperse the demonstrators while the majority of them were trying to leave at the end of the funeral," said Matar Matar, a senior member of Al-Wefaq, Bahrain's largest Shiite opposition formation.

Tens of thousands of Bahrainis, he said, were at the funeral of Jawad Marhoun, a 36-year-old who died late Wednesday from what Al-Wefaq said was "excessive exposure to tear gas from a canister tossed into his parents’ home on September 10."

The government of Sunni-ruled Bahrain, which crushed a month of Shiite-led democracy protests in mid-March, said Marhoun had died from "acute respiratory" problems as a result of sickle cell disease.

In April, the government said two other activists died from the blood disorder while in custody.

"Sooner or later, the people will achieve victory," the mourners chanted in the Shiite village of Sitra, according to Matar.

"He is the second victim within about two weeks in Sitra," said the former member of parliament.

"In general, the tension in Bahrain is increasing and the government is still using excessive force against the demonstrators and ignoring the demand for real dialogue that would lead to major political reforms."

On August 31, Ali Jawad Ahmed al-Sheikh, 14, died in the Shiite village of Sitra during a protest after prayers commemorating the beginning of the Muslim holiday of Eid al-Fitr.

The opposition said Sheikh was fatally wounded when he was struck in the face by a tear gas canister fired by security forces.

The government said the teenager died of trauma after suffering a blow from a blunt object to the back of the neck that could not have been caused by a rubber bullet or tear gas.

The deaths come ahead of parliamentary elections scheduled for September 24.

The opposition has already boycotted the polls and wants democratic reforms in the Gulf kingdom where a Sunni monarchy has ruled over a majority Shiite population for decades.

"I believe that the shortest path for stability can be reached if the king takes a brave decision to drive the kingdom (towards) tolerance and real political reform," Matar said.

Security forces in the archipelago were aided in the March crackdown on mostly Shiite protesters after being backed by troops with tanks from neighboring Sunni monarchies.

Authorities said 24 people were killed in the unrest, including four policemen. The opposition put the toll at 30.