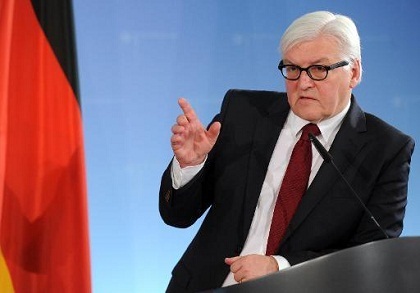 Germany's foreign minister on Thursday offered Berlin's experience in post-war reconciliation to Armenia and Turkey to help them forge peace a century after a World War I-era massacre.

On a visit to Yerevan, Frank-Walter Steinmeier said Germany's long road to partnership with France after two world wars could serve as an example following the 1915 slaughter of Armenians during World War I.

"When it comes to the bloody history of the 20th century, in which Germany started two world wars, we should not present ourselves as the schoolmasters," he told reporters after talks with his Armenian counterpart Edward Nalbandian in Yerevan.

"But we can offer our experience."

He noted that he had also told Turkish leaders earlier this year that Germany and France had worked hard to overcome the hatred of previous generations.

"After a difficult century, we have reconciled by not keeping silent about our historical responsibility" but by "working through the horrific things that happened", he said.

"If our experience can be helpful, we are ready to offer it," he said, citing youth exchange program as one initiative that had helped to build bridges.

"But that must be decided here."

Nalbandian said Armenia was ready to reduce tensions with Turkey but insisted the ball was in Ankara's court.

"Five years ago, on Armenia's initiative, we started a process that led to the signature of the Zurich protocols -- to make the normalization of our relations possible," he said.

"But Turkey is not respecting these agreements."

Armenians say up to 1.5 million of their forebears were killed in a 1915-1916 genocide by Turkey's former Ottoman Empire.

Turkey categorically rejects the term genocide and argues that 300,000 to 500,000 Armenians and at least as many Turks died in civil strife when Armenians rose up against their Ottoman rulers and sided with invading Russian troops.

In April, Turkey's then prime minister Recep Tayyip Erdogan, who is now president, expressed his condolences over the massacre of Armenians, which he called "our shared pain", but his overture was brushed aside by Yerevan as insufficient.

Switzerland mediated between Armenia and Turkey in 2009, leading to landmark pacts being signed in October that year in a first step towards ending decades of hostility but the efforts soon stalled.