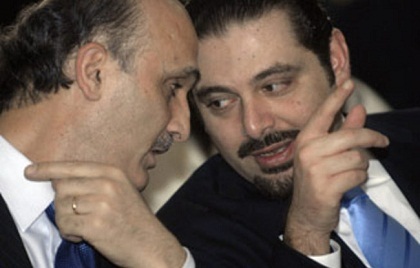 Al-Akhbar newspaper reported on Saturday that Hariri informed Kataeb party MP Sami Gemayel that Geagea will not reach the presidential palace in Baabda.

Gemayel traveled on Sunday with Geagea on a three-day visit to Saudi Arabia.

It is still unclear whether or not Geagea and Gemayel held a tripartite meeting with Hariri.

Lebanon's political scene has reached an impasse over differences between the March 8 and 14 alliances.

The country has been without a president since the term of Michel Suleiman ended in May as the rival parties have failed so far to agree on a compromise candidate, which is also threatening to torpedo the upcoming parliamentary elections.

Al-Joumhouria newspaper reported on Saturday that head of al-Mustaqbal parliamentary bloc MP Fouad Saniora, head of Hariri's office Nader Hariri, ex-MP Ghattas Khoury and several other figures discussed with Geagea and Gemayel the political crises upon their arrival in Beirut.

It sounds like Hariri called Al Akbar and told them what went on in his meeting with Sami Gemayel.

No Geagea + No Caporal + No Amine + No old politicians. Get young, competent, honest and patriotic people like Sami Gemayel.

Those wacky Alakhbar people again, that's what she said.