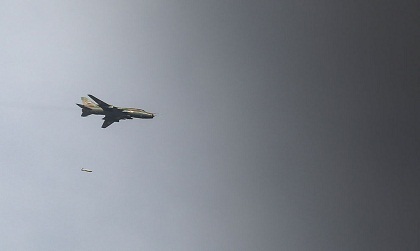 Syrian government air strikes on two rebel-held areas of the central province of Homs killed at least 25 civilians, 11 of them children, a monitoring group said on Sunday.

Sixteen members of a single family were among 18 people killed in raids late Saturday on the town of Talbisseh, the Syrian Observatory for Human Rights said.

They included 10 children and three women, said the Britain-based monitoring group which has a wide network of sources inside Syria.

In the Waer district on the outskirts of Homs -- the only area of Syria's third city still in rebel hands -- the evening air strikes killed seven people, including a child, the Observatory added.

Homs was once dubbed "the capital of the revolution" against President Bashar Assad.

But government forces retook control of the whole of the rest of the city in May when rebel fighters withdrew from central districts under a U.N.-brokered deal that ended a punishing two-year siege.

The Caporal will still find excuses for the Butcher...

Children training in a Salafi boot camp most likely.