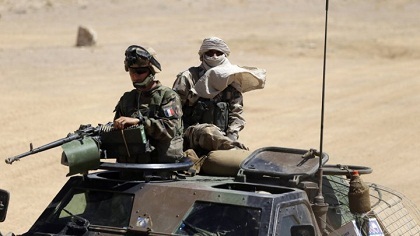 Fighting between French military forces and jihadists continued overnight in northern Mali where soldiers are carrying out a large-scale operation, the army said Thursday after a staff sergeant was killed.

Thomas Dupuy, a 32-year-old Afghanistan veteran who belonged to a commando parachute group, was killed in violent clashes with hardline Islamists in Mali's Tigharghar mountain range early Wednesday, as part of an operation aimed at stemming the return of jihadists in the north.

"The French army has the situation under control," said military spokesman Gilles Jaron.

"The fighting continued through the night, but we have the upper hand on the field.

"We were faced with some 30 heavily armed terrorists, we estimate that this morning around 20 of them were neutralized."

Jaron added that a "much larger" operation by French forces was currently taking place in northern Mali, without giving further details. It was not clear whether this was a separate intervention or part of the same battle.

French troops intervened in Mali in January 2013 to chase out hardline Islamists, including Al-Qaida in the Islamic Maghreb, which had seized control of the country's northern desert cities.

This intervention was replaced several months ago by a wider counter-terrorism operation, codenamed Barkhane, in five countries along the southern rim of the Sahara including Mali.

The operation is currently focusing on stemming a resurgence of jihadists in Mali and cutting their rear bases in Libya.

Dupuy was the 10th French soldier killed in Mali since January 2013.