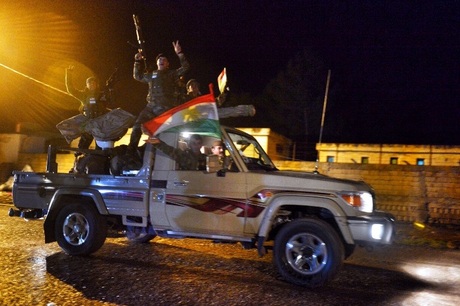 Fighting raged in the Syrian border town of Kobane on Saturday after jihadists launched a new assault on Kurdish militia bolstered by the arrival of heavily armed Iraqi peshmerga forces.

The roughly 150 Iraqi fighters, many of them chanting "Kobane", received a hero's welcome as they crossed the border from Turkey late Friday to join fellow Kurds trying to repel the Islamic State (IS) group.

The town has become a key battleground whose capture would be a major prize for the jihadists, giving them unbroken control of a long stretch of Syria's border with Turkey.

Fierce clashes in and around Kobane have killed about 100 IS fighters in the past three days, the Syrian Observatory for Human Rights reported.

Fifteen Kurdish defenders also lost their lives on Friday, according to the Britain-based monitoring group, which relies on a wide network of sources inside Syria.

It said in total 958 people had been killed since IS launched an assault on Kobane in mid-September -- 576 IS jihadists, 361 Kurdish fighters and 21 civilians.

IS has seized large parts of Syria and neighboring Iraq for a self-proclaimed "caliphate", imposing its harsh interpretation of Islamic sharia law.

The United States, along with European and Arab allies, has conducted daily air raids against the group.

Kobane's defenders have been pleading for reinforcements and the peshmerga armed with machineguns, heavy artillery and rocket launchers traveled through Turkey to Syria from Iraq's autonomous Kurdish region.

They stood atop their pick-ups, waving to onlookers and brandishing their rifles in the air as they crossed the frontier into Kobane. Turkish police lined the road holding anti-riot shields.

Intense fighting erupted late Friday in the town and continued during the night as Kurdish fighters fended off a new IS attack in the north of the city, the Observatory said.

Gunfire and explosions were heard on Saturday morning although the peshmerga forces were not thought to have yet joined the fighting, it said.

Turkish President Recep Tayyip Erdogan took aim at Western leaders for focusing too much on the battle for Kobane.

"Why are coalition forces continually bombing this town of Kobane?"

"We talk about nothing other than Kobane which is on the Turkish border and where there is no one left any more except 2,000 people fighting," he said.

Ankara's decision to allow the peshmerga and opposition rebels to cross its border into Syria has sparked condemnation from Damascus, which denounced it as a "flagrant violation of Syrian sovereignty".

The multi-sided Syrian war has killed more than 180,000 people and forced millions from their homes since it began three and a half years ago as an uprising against the regime of President Bashar al-Assad.

U.S. hopes of creating and training a moderate rebel force as a counterweight to jihadists and Assad's forces suffered a blow after Al-Qaeda affiliated militants drove rebels of the Western-backed Syrian Revolutionary Front from their bastion in the northwestern province of Idlib.

The Al-Nusra Front jihadist group captured the village of Deir Sinbel and seized arms and tanks from the SRF, the Observatory said Saturday after 24 hours of combat.

The moderate rebel group, backed by the West and various Arab countries, favors the establishment of a democratic state in a post-Assad Syria.

In Iraq, government forces Friday attacked the strategic jihadist-held town of Baiji, which has been out of Baghdad's control for months, regaining control of two areas, army officers said.

Baiji lies on the main highway to Iraq's IS-controlled second city Mosul, and its recapture would also help to further isolate militants in the city of Tikrit, to the south.

About 600 U.S. military advisers are already based in Baghdad and in the northern city of Arbil.

But as IS has steadily rolled back the Iraqi army in the west, U.S. and coalition officials have grown increasingly convinced of the need to station advisers in Anbar to assist the Iraqi troops.

"We're going to have to help stiffen their resistance and provide some help outside of those two cities, Baghdad and Arbil, and specifically to help them in Anbar province," a senior U.S. military officer said on condition of anonymity.

ISIL is now going to have more than it bargained for, Peshmerga and PKK will prove to the Islamists that people who've lived on their lands for centuries just don't leave like this. The Kurds will show ISIL the way out, soon ISIL will be sent routing. May these blood thirsty cowards get a taste of their own medicine. I hope this post won't offend Naharnet though.