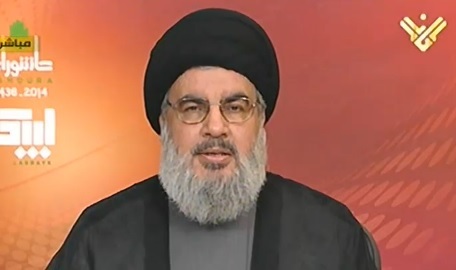 Hizbullah chief Sayyed Hassan Nasrallah on Sunday stressed that his party's military intervention in Syria has nothing to do with esoteric end days prophecies about the return of Imam Mahdi.

“We are fighting in Syria to prevent American, Zionist and takfiri hegemony,” Nasrallah said in a largely religious speech marking the eighth night of Ashura.

The televised address focused on the issue of Imam Mahdi, who in Islamic eschatology is the prophesied redeemer of Islam who will rule for seven, nine, or nineteen years before the Day of Judgment and will rid the world of evil.

“We do not need a religious justification to fight in Syria and we're not fighting to implement the signs which narrations say would pave the ground for the emergence” of Imam Mahdi, said Nasrallah.

“We are rather fighting to defend Lebanon and the region and to prevent a repetition of what (Islamic State chief) Abu Bakr al-Baghdadi did against the Iraqi Albu Nimr tribe,” added Nasrallah, referring to a fresh wave of mass killings by the IS extremist group in Iraq's Anbar province.

Hizbullah's chief warned that “linking everything that is happening to the 'signs of emergence' has dangerous cultural and ideological repercussions, which can only lead to aberration.”

Interest in Mahdi and end day prophecies increased among the ranks of some Shiites and Hizbullah supporters after the group sent thousands of fighters into neighboring Syria.

There is no explicit reference to the Mahdi in the Quran, but references to him are found in hadith -- the reports and traditions of Prophet Mohammed's teachings that were collected after his death.

Differences exist in the concept of the Mahdi between Sunni Muslims and adherents of the Shiite tradition. For Sunnis, the Mahdi is Mohammed's successor who is yet to come. For most Shiite Muslims, the Mahdi was born but disappeared and will remain hidden from humanity until he reappears to bring justice to the world.

For Twelver Shiites, this "hidden Imam" is Mohammed al-Mahdi, the Twelfth Imam.

Did they check the found and lost room?

......by accepting the MUTELATEH the caporal is destroying the christians of Lebanon

“We are fighting in Syria to prevent American, Zionist and takfiri hegemony,” Nasrallah said in a largely religious speech marking the eighth night of Ashura.
--More like you are fighting in Syria because Iran ordered you to do so. Why would you go there on your own initiative and spare the lives of so many of your fighters, and bring chaos to Lebanon??

“We do not need a religious justification to fight in Syria and we're not fighting to implement the signs which narrations say would pave the ground for the emergence” of Imam Mahdi, said Nasrallah.
--Yeah that's why you said you were fighting in Syria to protect Shia shrines...

For the first time in my life, I come to wish that we use atomic bombs on these fanatic assholes, ie hizbullah, assad, daech, ayatollahs, mullahs, wahhabites and all this crap... Use these atomic weapons to eliminate useless vermine instead of aiming them on Russians who gave us Tchaikovsky and Dostoeivsky!!!

I've had enough taqiya for one day, night all!

now ft will ask you to produce the doctor's report :)

yes shia do believe in this Mehdi BS.
actually there is nothing wrong in them believing what they want, after all each person is allowed to his beliefs and religion.
what is not allowed is their extremist terrorist actions, and their constant scare tactics as if people do not see.
they kept talking about extremists in Tripoli wanting to invade the north, and the truth came up: 30 misguided idiots....

Sayed Hassan, OK, OK, ya khal, let's say we believe you, OK khal, now instruct your lackeys Michel Aoun and Nabih Berri to stop blocking the way to constitutionality. We must have a president ASAP, plus the parliamentary issue must be resolved ASAP. Yalla, we shall tackle the rest thereafter.

Hizbullah fighting in Syria is linked to one thing only -----> Orders from his bosses in Iran. Period

I see those fake accounts are back at it again! :) Anyhow enjoy the celebrations of your native countries.