U.S. Calls for Restraint in Yemen 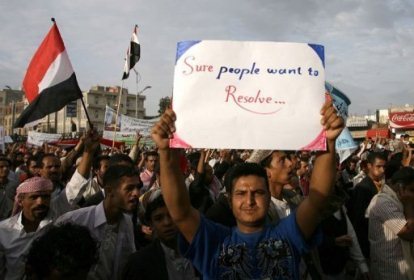 The United States on Monday called for restraint in Yemen where activists and medics said at least 53 anti-regime protesters have been killed in two days of violence.

The U.S. embassy said Washington hoped for a peaceful transition of power in Sanaa and hoped a Gulf Cooperation Council initiative would be signed within a week to transfer power from President Ali Abdullah Saleh to his deputy.

"The United States regrets the deaths and injuries of many people during protest marches in Sanaa yesterday (Sunday). In this tense situation, we call upon all parties to exercise restraint," the statement said.

"The United States continues to support a peaceful and orderly transition in Yemen, one which addresses the Yemeni people's aspirations for peace and security.

"We remain hopeful that an agreement will be reached that leads to the signing of the GCC initiative within one week."

Protest organizers said security forces shot dead 27 anti-regime demonstrators on Monday and wounded more than 900 others, a day after 26 people were reported killed and 500 injured.

The bloodshed came as U.N. and GCC envoys arrived in the Yemeni capital to push for the signing of a GCC initiative that would transfer power from Saleh to his deputy.

The embattled president, who is in Saudi Arabia since June recovering from injuries sustained in an attack on his Sanaa compound, had been staunchly resisting international and regional pressure to yield power.