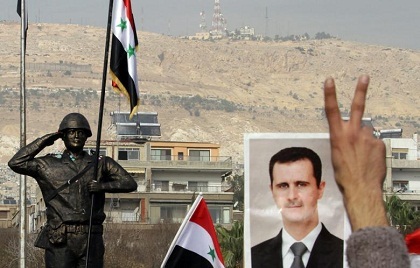 The Syrian army on Wednesday recaptured two key gas fields and a gas company in central Homs province, less than a week after their seizure by jihadists, a monitoring group said.

"Regime forces and pro-regime militia retook control of the Jhar and Mahr gas fields, as well as the Hayyan gas company in the east of Homs province," said the Syrian Observatory for Human Rights.

The facilities had fallen into the hands of the Islamic State (IS) jihadist group late last week.

The facilities are near the Shaer gas field, parts of which are still under IS control after a deadly attack late last month, though the army is advancing in its bid to recapture it fully, said Abdel Rahman.

"The army's advances come amid fierce fighting and heavy regime air raids against IS positions. These gas facilities are simply too important for the regime to let go," he told AFP.

"The army is advancing in Shaer... and has killed many terrorists," said SANA.

IS has targeted oil and gas facilities in Iraq and Syria as it seeks funds for its fight to seize territory for a self-proclaimed Islamic "caliphate".