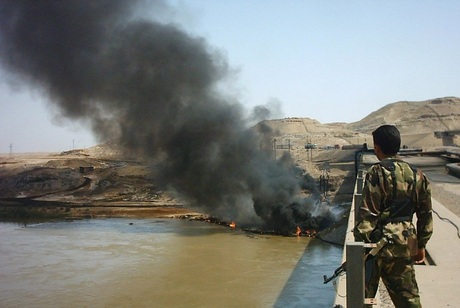 Iraqi forces broke the Islamic State group's months-long siege of the country's largest oil refinery Saturday as America's top officer flew in to discuss the expanding war against the jihadists.

Completely expelling IS fighters from the area around the refinery would be another significant achievement for Baghdad, a day after pro-government forces retook the nearby town of Baiji.

Three military officers confirmed that Iraqi forces had reached the refinery, 200 kilometers (120 miles) north of Baghdad, where security forces have been surrounded and under repeated attack since June.

This new success for government forces came a day after they recaptured nearby Baiji, the largest town to be retaken since IS-led militants swept across Iraq's Sunni Arab heartland in June.

A joint operation by the army and Shiite militia earlier this week wrested back the Adhaim Dam in the eastern province of Diyala.

A breakthrough preliminary deal reached on Thursday between the federal government and the autonomous Kurdish region on long-standing budget and oil disputes also raised the prospect of increased coordination in the fight against IS.

The jihadist group released an audio recording on Thursday purportedly of its chief, Abu Bakr al-Baghdadi, after rumours that coalition air strikes may have killed or wounded him.

The IS group has had most of the initiative, both on the ground and in the propaganda war, in recent months.

But the man said to be Baghdadi seemed at pains to reassure his followers, and the lack of video failed to dispel speculation he might still have been wounded.

America's top military officer, chairman of the Joint Chiefs of Staff General Martin Dempsey, arrived in Iraq for talks on the expanding military operations against the jihadists with Prime Minister Haidar al-Abadi and other Iraqi and American officials.

A U.S.-led coalition is carrying out a campaign of air strikes targeting IS jihadists in both Iraq and Syria, and Washington has announced plans to increase the number of its military personnel in Iraq to up to 3,100.

"The primary purpose of his visit is to get a first-hand look at the situation in Iraq, receive briefings and get (a) better sense of how the campaign is progressing," Thomas said.

The United States and other governments have pledged trainers and advisers to aid Iraqi security forces in their battle against IS.

American personnel are assessing deployment sites in Iraq, including Al-Asad Air Base in Anbar province, a key area that stretches from the borders with Syria, Jordan and Saudi Arabia to the western approach to Baghdad.

The operation to retake Baiji began more than four weeks ago when security forces and pro-government fighters began advancing towards the town from the south.

Slowed by bombs the militants had planted on the way, they finally entered the town on October 31.

The huge refinery once produced 300,000 barrels a day, accounting for half of the nation's needs in refined oil products.

It is also on the road linking the two largest cities in Iraq under jihadist control, Mosul and Tikrit.

Washington has repeatedly stated that it will not deploy "combat troops" to Iraq, but Dempsey said on Thursday that sending out advisers alongside Iraqi forces was something that "we're certainly considering".

At least 17 people were killed in two explosions in northwestern neighborhoods of the capital on Friday.