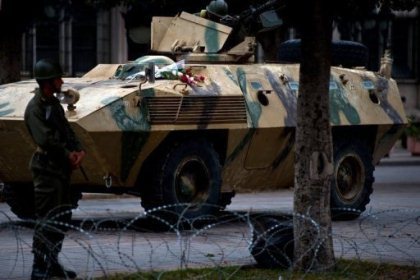 The Tunisian army on Wednesday destroyed a convoy that included vehicles mounted with anti-aircraft guns in a remote southern region near the Algerian border, the defense ministry said.

"A helicopter destroyed seven out of the nine vehicles spotted by an aerial patrol on Wednesday at 05:00 GMT," ministry spokesman Haykel Bouzouita said.

He said the fighting was taking place in Bir Znigra in the Kebili region, located in the extreme southern desert, and added that the convoy was only 20 kilometers from the Algerian by nightfall.

Bouzouita refused to give further details, merely stating that "these people are very tenacious.

"We want first of all to finish this operation before announcing anything," he said.