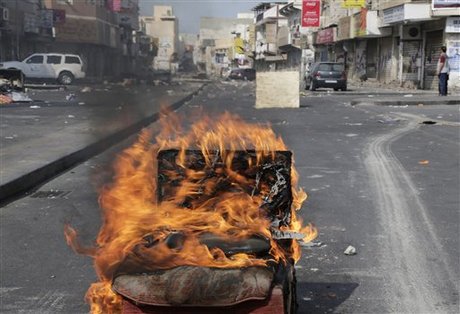 Bahrain went to the polls Saturday for its first legislative elections since a failed pro-democracy uprising in 2011, with the opposition boycotting the vote in the tiny Gulf monarchy.

Al-Wefaq, the main opposition group, warned on the eve of the vote that failure by Bahrain's rulers to ease their "monopoly" on power could trigger a surge in violence.

In the Shiite village of Sanabes, west of Manama, clashes erupted between youths and security forces in the afternoon, an AFP reporter said.

Security forces fired tear gas to disperse the demonstrators, some of whom were masked and armed with petrol bombs.

Voting had been due to last 12 hours until 1700 GMT, but this was later extended for two more hours, according to state media, in a likely bid to boost turnout.

The move came after officials said only 10 percent of eligible voters had cast ballots two hours before polling stations were to have been closed.

Almost 350,000 Bahrainis have been called to elect a 40-member parliament, with most of the 266 candidates Sunnis.

The vote has been denounced by critics as a farce.

The boycott means turnout will be a key marker of the validity of the vote, which comes nearly four years after authorities crushed a month-long uprising calling for democratic reform.

Al-Wefaq withdraw its 18 lawmakers after the crackdown.

In Sanabes, and other Shiite villages around the Bahraini capital rocked by clashes overnight and during the day, shops were shuttered, witnesses said.

Security forces were deployed and plumes of smoke were seen rising from at least three districts.

On Saturday, hundreds of demonstrators took to the streets of the Shiite village of Diraz, with police firing tear gas to disperse them.

"The elections have no meaning," said Yassin, an unemployed 35-year-old.

Umm Hussein, a woman draped in black, said "it's a farce," describing the boycott as a "success".

By contrast voting appeared to be brisk in Sunni-dominated districts like Rifaa, in south Manama, where dozens of voters, mostly men, lined up outside pollings stations from early morning.

"This election will help the development of the country under the leadership of the king," said Naima El-Heddi, a civil servant in her 30s.

Shiite demonstrators have frequently clashed with security forces in villages outside the capital, and hundreds have been arrested and tried since the month-long uprising was crushed in early 2011.

The country's political rivals have struggled to bury their differences through a so-called "national dialogue" that fell apart despite several rounds of negotiations.

Al-Wefaq chief Sheikh Ali Salman said the lack of accord could lead to an "explosion" of unrest in Bahrain, home to the U.S. Navy's Fifth Fleet and a partner in the U.S.-led campaign against the Islamic State group in Syria and Iraq.

The opposition wants a "real" constitutional monarchy with an elected prime minister independent from the Al-Khalifa royal family.

But the Saudi-backed Sunni dynasty that rules over the majority Shiite kingdom has rejected the demand.

In October, a court banned Al-Wefaq for three months for violating a law on associations.

The movement refused to resume talks with the authorities in September despite a new proposal announced by Crown Prince Salman bin Hamad al-Khalifa.

Salman said he did not expect the opposition to reach an agreement with the government, following Shiite-led protests he said had cost "at least 100 lives" in the past three years.

Information Minister Samira Rajab stressed ahead of the polls that the government would not tolerate "chaos, unrest and foreign meddling" -- a reference to Shiite Iran.

Attacks that cause death or injuries can now be met with capital punishment or life imprisonment.

Municipal elections are also being held on Saturday.