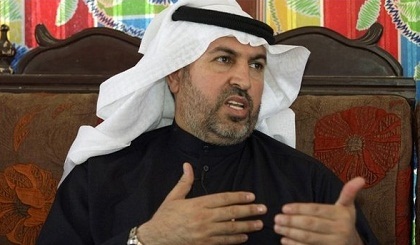 An Iraqi court sentenced former Sunni MP Ahmed al-Alwani to death Sunday for murder, a spokesman said, a verdict that could damage Baghdad's relationship with a powerful tribe battling jihadists.

Alwani is a member of the Albu Alwan tribe, members of which are fighting against the Islamic State (IS) jihadist group in the Ramadi area of Anbar province, a key front in the war against IS which has seized key parts of Iraq since June.

He has a month to appeal the decision, Bayraqdar said.

Alwani, who was a prominent supporter of a now-collapsed Sunni Arab anti-government protest movement, was arrested in a raid on his house in late December 2013 that killed his brother Ali and five guards.

The defense ministry said at the time that one security forces member was also killed and five were wounded in the raid.

It said Ali was the target of the raid, but that both brothers and the guards opened fire when security forces arrived.

Ahmed had parliamentary immunity, but the constitution permits MPs to be arrested without their immunity being waived in cases of serious crime.

Alwani's arrest inflamed Sunni Arab anger with the Shiite-led government, which many Sunnis view as having marginalized and unjustly targeted their community.

Just days after the raid, security forces demolished the country's main Sunni anti-government protest camp near Anbar capital Ramadi, setting off a series of events that led to the government losing control of parts of that city and all of Fallujah, farther east.

Almost 11 months later, Fallujah is still entirely out of Baghdad's control and is now a stronghold of the IS, while security forces and allied tribesmen are still battling for control of Ramadi.