March 14: Hizbullah's Deal to Release its Captive from Islamists Proves its Double Standards 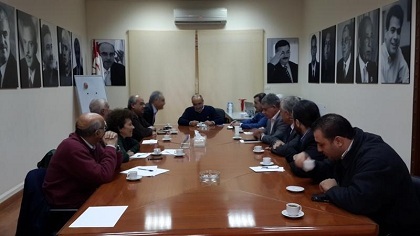 The March 14 General Secretariat condemned on Wednesday Hizbullah's negotiations with Islamists that ensured the release of a party member at a time when the government has been laboring to release servicemen held by extremist groups.

It explained: “The party has disregarded the government's crisis cell aimed at releasing the servicemen even though it is a member of the cabinet.”

“Hizbullah's deal is another sign of its undermining of the role of the state,” it remarked.

“The party resorts to the state when it cannot achieve a goal and chooses to disregard it when it believes it can obtain its aims on its own,” it said.

Hizbullah chooses to negotiate “with those it calls takfiris and terrorists … and prevents the state from striking any possible deal over the release of the servicemen,” remarked the General Secretariat.

Moreover, it noted that the kidnapping of the soldiers and policemen is a product of Hizbullah's fighting in Syria.

It accused the party of deeming the servicemen as “state prisoners who are unworthy of freedom, while its members deserve protection.”

The case of captive servicemen should be an “absolute national priority” because it concerns all the Lebanese people regardless of their sect or political affiliations, it added.

It has become necessary to resolve this case for the sake of the captives' families and the dignity of the state, it stressed.

Hizbullah managed Tuesday to secure the release of one of its fighters who had been in the custody of Syrian groups in the mountains of the Qalamun region near Lebanon's border, which has been witnessing fierce clashes in recent months.

“The captive Imad Ayyad was freed at noon following weeks of negotiations with the abductors,” Hizbullah's media department announced in a statement.

Ayyad was released “in exchange for two gunmen who were in Hizbullah's custody,” the statement revealed.

The families of the servicemen, kidnapped from the northeastern border town of Arsal in August, voiced on Wednesday their frustration with the development.

They remarked how the party was able to release its captive, but the state has been incapable of reaching any breakthrough in its negotiations.

They vowed to take escalatory measures on Friday in order to pressure the state to release their loved ones.

The servicemen were kidnapped by Islamic State and al-Nusra Front gunmen following clashes with the army in Arsal in August.

Lebanon State dont negociated with terrorists! if HZ negociated is problem of them...

you may be right but nonetheless, this shows the double standards of Hizbollah.

No you useless leaders...watch & learn how its done.

HA is unlike you lot of bought leaders who run to outsiders to do your bidding each & every time.

Tine for military rule & you useless bunch turfed out on your ears.

oh gee, i wonder where the hezb got all their weapons and powers that allowed them to save this prisoner to start with.

Terrorists negotiating with terrorists... Hizb, Nusra, Isis are all the same, they are uncontrolled militias perpetrating a religious fanatism based on barbaric concepts. Why is anyone surprised?

Instead of this article congratulating HA for freeing a Lebanese from terrorists, they found a way to echo March14's criticism. March14 is jealous of HA's negotiating, tactical & persistence skills. Thats the truth. But - in Lebanon, everyone has the right to voice an opinion.

Let the resistance, negotiate for the LAF soldiers then. The M14 would never allow that, even if 100 takfiris were captured for exchange, they wouldn't accept that the Resistance negotiate for our captured soldiers.

sure as for you hezbollah replaces the state.... as you do not respect it.

Al-Akhbar Ibrahim al Amin, known for his close ties to Hezbollah, mourned the death of Bin Laden, saying that anyone who attacks Western interests around the world should be venerated.

If this happens Al-Akhbar Ibrahim al Amin, known for his close ties to Hezbollah, mourned the death of Al Qaeda

All it means we need to capture more Salafists so we have more to bargain with.

Even the stupid Aouniyeh said that Islamist prisoners shouldn't be released. And now look at Roar, saying "watch and learn how it's done" and that Hezbollah aren't bought out leaders.

Roar, you're a disgrace to the site. You claim to be a Christian and you accept this fanatical Islamic group controlling the country, assassinating politicians, and taking part in foreign wars that bring more chaos to Lebanon.

Nick, Roar does have a point, you know: Hizb aren't bought-out leaders; they're bought-out mercenaries.

We also know that killing soldiers/marines during war isn't terrorism. Don't be silly.

You two definitely keep this site interesting. The love, the betrayal, the drama!

You could try Rambo.

Hizballahs motto should say it all Hypocrites.
“Hypocrisy is the mother of all evil and racial prejudice is still her favourite child.”