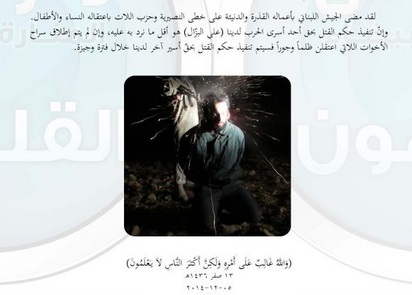 The government decided Friday to engage in “direct negotiations” with the captors of the Lebanese troops and policemen, as the Qaida-linked al-Nusra Front announced in a vague statement that the execution of the soldier Ali al-Bazzal is “the least response” that can be expected from the group.

“The Lebanese army has pressed on with its dirty and malicious deeds … through the arrest of women and children,” the group said in a statement published on the Twitter account of its Qalamun branch.

“Carrying out the death sentence against one of the prisoners of war who are in our custody – Ali al-Bazzal – is the least response that it can expect from us,” al-Nusra added.

It said another hostage will be executed soon “if the sisters who have been arbitrarily detained are not released.”

The statement was accompanied by a picture apparently showing a militant standing behind al-Bazzal and pointing a rifle to his head.

The image appears to be photoshopped to show blood bursting out of al-Bazzal's head.

The government's decision was reached during an emergency security meeting at the Grand Serail that was attended by Prime Minister Tammam Salam, the ministers of defense, interior, justice, finance and health, in addition to the chiefs of the army and security agencies.

The conferees decided to “seek direct negotiations in parallel with the efforts of the Qatari mediator,” Syrian national Ahmed al-Khatib, MTV said.

Khatib's endeavor suffered another setback on Thursday, after top jihadist militant Anas Sharkas, aka Abu Ali al-Shishani, announced that the Qatari negotiator should not try to visit Syria's Qalamun before Lebanese authorities release his wife, Syrian national Alaa al-Oqaili, who was arrested Tuesday in the northern region of Zgharta.

The Lebanese army has also managed to arrest an Iraqi woman identified as Saja al-Dulaimi, whom Interior Minister Nouhad al-Mashnouq identified as a divorcee of Abu Bakr al-Baghdadi, the chief of the Islamic State group that has seized vast swathes of Iraq and Syria.

“Al-Shishani's wife is involved in security cases and she will not be released, but the state will deal with his threats by taking more measures,” MTV reported Friday evening, referring to an Internet video in which the top militant called on the Lebanese authorities to free his spouse or face retribution.

As for Dulaimi, the TV network noted that she will not be freed because she was involved in transferring funds to the Qaida-linked al-Nusra Front.

“Al-Shishani has not pledged allegiance to the Islamic State and has not joined al-Nusra, and the Front has only showed solidarity with him through forbidding the Qatari mediator from visiting Qalamun,” MTV added.

According to the TV network, the conferees at the Grand Serail meeting decided to use the two detained women as “cards of strength” in any negotiations.

“The government is seeking to find a channel of communication between (General Security chief) Maj. Gen. (Abbas) Ibrahim and the kidnappers,” MTV said.

Meanwhile, the families of the captive servicemen denied media reports that they intend to end their open-ended sit-in outside the government's headquarters in Riad al-Solh.

They stressed that they will only end their protest when their sons return from captivity.

The IS and al-Nusra had in August abducted several Lebanese troops and policemen during deadly clashes with the army in and around the northeastern border town of Arsal.

Around 27 servicemen remain in the custody of the two groups while three have been executed.

Lebanese authorities have been under intense pressure from the families of the captured men to negotiate their release.

While it is very hard to understand the amount of frustration, fear and worry that the families of the servicemen are feeling, they must also understand that they are being used by Al Nusra in a negative way.

Al Nusra makes some demands, the families hold sit ins and protests, the government agrees to the demands. Al Nusra sees how effective that is and makes even more demands with the hope that the families will keep pushing and Al Nusra will keep gaining more and more.

It is my personal belief that the problem will only be resolved when the families of the servicemen and the government stand hand by hand on one side instead of bickering and fighting each other, at the very least, not in public.

Damn, damn, damn, this is what I feared most, that our state as usual screws up in its usual fashion. here we are, an innocent Lebanese Life has been lost, a Lebanese man in uniform who was serving his nation and its people, who got kidnapped by these evil terrorists, and now he lost his precious life to these same terrorists!! Damn! The state can't do a thing, why did it not hand over to the families these prisoners, today we would have executed 30 of them, then we shall see what the terrorists will do next. Yes, certainly the anger is mounting everywhere in Lebanon and because of this we could see things get derailed. The state is unfit for anything, the army should not have listened to the civilians, the army should have leveled Arsal and all this wouldn't have happened. Either the army gets to act independently or we shall never come out of our chaos. Rest in peace soldier, you died because of our state's stupidity.

FT which is exactly why I keep saying the same old song, get us rid of all civilian leaders, I mean all of them, let the army rule, let the army takeover, let the army do what it should do. Armies and civilians don't think the same, in all reasonable thought, the army today is called for thinking militarily. let the army TODAY execute 30 SOBs for our boy whom they killed today. Where is Mr. Ibrahim who promised to retaliate, where is he, damn!! I care less, let at least 30 satanic terrorist takfiris be hanged this Sunday and in public otherwise the people are now reaching boiling point.