Brazil's 'Girl from Ipanema' Beach Gets Statue of Composer 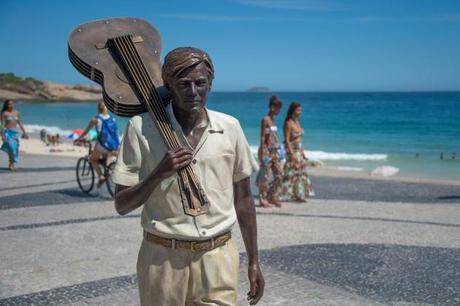 The statue of late Brazilian musician and composer Antonio Carlos "Tom" Jobim is unveiled in Rio de Janeiro on December 8, 2014

A statue honoring Brazilian singer-composer Antonio Carlos "Tom" Jobim was unveiled Monday at the Rio beach where the bossa nova legend immortalized with his song "The Girl from Ipanema."

Rio's city hall commissioned the 200 kilo (440 pound) bronze statue depicting Jobim with a guitar slung over his shoulder to mark the 20th anniversary of the star's death.

"I chose to represent a young and handsome Tom Jobim showing him at the peak of his success in the 1960s," said sculptor Christina Motta.

"The photo, which acted as an inspiration, is significant in that it was from the time when he and Vinicius de Moraes had just finished a symphony in Brasilia," Motta added.

Jobim died in 1994 at the age of 67, three decades after his 1962 collaboration with Vinicius de Moraes on "The Girl from Ipanema" that took the world of popular music by storm.

The song paid tribute to the bronzed beauties who strutted along the beach in Rio's well-heeled Ipanema district just around the corner from Copacabana beach.

One of the most recorded pop songs in history, "The Girl from Ipanema" album won a Grammy award in 1965 and was sung by many stars, including Frank Sinatra.

Jobim, who had Rio's international airport named after him in 1999, is considered one of Brazil's greatest musicians, having composed hundreds of songs and released more than 50 albums.