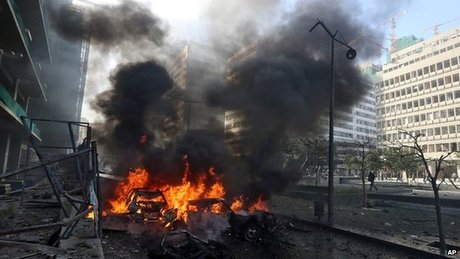 A senior militant recently detained by the Lebanese army was involved in the assassination of Minister Mohammed Shatah, the transfer of suicide bombers who killed dozens of people, in addition to several other terror offenses, media reports said on Thursday.

“Mahmoud Ahmed Abu Abbas was arrested in (the Bekaa town of) Majdal Anjar before being immediately transferred to the defense ministry building,” al-Mayadeen television reported.

It said he was involved in the 2013 assassination of Minister Mohammed Shatah in a central Beirut car bombing.

Military sources informed on the investigations told al-Mayadeen that “the car used in Shatah's assassination came from the Ain el-Hilweh camp,” noting that Abdullah Azzam Brigades leader “Majed al-Majed was arrested four days after the assassination.”

Majed was reportedly the mastermind of the deadly twin suicide bombing that targeted the Iranian embassy in Beirut in November 2013. The Lebanese army announced in January that Majed, a Saudi militant, had died of illness at the central military hospital in Beirut after being arrested on December 26, 2013.

On Thursday evening, al-Manar television announced that the detainee Abu Abbas had transported “more than one booby-trapped car” from the outskirts of the Bekaa border town of Arsal to areas inside Lebanon.

He was also behind sending the bomb-laden car that exploded prematurely at the Dahr al-Baydar checkpoint before reaching its supposed destination in Beirut's southern suburbs, al-Manar said.

Abu Abbas also confirmed that the Abu Assaf Cafe in Tayyouneh -- where dozens of football fans were watching a World Cup match in June -- was the target of the car bomb that exploded several meters away from the popular coffee shop.

Earlier on Thursday, al-Akhbar newspaper said the Army Intelligence captured Abu Abbas in an “ambush” around a week ago, describing him as a “hefty catch.”

It said the prominent militant leader hails from the eastern Bekaa town of Majdal Anjar.

The newspaper said that the detainee confessed that he transported the suicide bomber of Dahr al-Baydar and Beirut's Tayyouneh roundabout in June.

Sources said that the suspect is the right hand of Sirajeddine Zureiqat, a so-called spokesman of the Qaida-linked Abdullah Azzam Brigades.

The detainee also provided a residence for Iraqi woman Saja al-Dulaimi, who was identified as a divorcee of Islamic State leader Abu Bakr al-Baghdadi.

Al-Dulaimi was arrested at a checkpoint on al-Madfoun Bridge in the North, along with her Palestinian husband and 8-year-old Hajar, her daughter from al-Baghdadi. The arrest took place last month and was kept a secret until the media put it out to public.

Abu Abbas also confessed to moving fighters between Majdal Anjar, Arsal, the northern city of Tripoli and the southern town of Shebaa.

He also said that he handed money over to Shadi al-Mawlawi, a fugitive Islamist militant, several times.

Thank you. And in return, I believe I can speak for all when I say we all value your opinion equally.

Arrest as many as you want including women and children. They will all just be added to the list of our demands. You will release them all in no time if you are serious about your soldiers being freed.

Bravo Army..hope to catch all z terrorits..
PLS re-introduce the guillotine as baghdadi, jomaa, zuriqat, hujeiri, mawlawi ect.. only understand that specific language..
thank u all

YSURAIS, the victim is M14 and you always says that they support takfiris, so if you don't mind not to call M14 takfiris any more . right?

it is well known that for hezbis and M8ers, M14 love to kill each other by car bombings...

shatah was a moderate, like rafic hariri he did not fall in line with the wahhabi/takfiri plots.

wahahahaha! what a lame excuse once more: so now we have moderate M14 and takfiri M14 and zionist M14! i guess it depends on the propaganda of the day or as you have no solid argument to try and get yourself out of your stupidity....

Actually that is very true open safe roads fir them, then corner them bit by bit to arsal... nit innocent at all.

If it wasn't for Hizb you wouldn't be talking right now . Lebanon would have been gone , for all you Hizb haters out there your nothing but gronks.

The only dogs are you and Aoun, payrolls come from Tehran, MulatIran bank, Master is the commander if the Revolutionary Guard. God bles Saudi arabia fir ther welcome support to the lebanese legitimate institutions and the army for all lebanon unlike yoyr madters ... dogy... coush.

funny how hezbi media spread their propaganda... any official investigations and judgements to say anything? or just pro hezbi media do it?

Yet another report in the protracted disinformation campaign by the usual suspects to divert attention from the real culprits.

This is a small reminder
http://www.naharnet.com/stories/en/117823

the very first post in the comments section by one of the usual suspect were all know well says it all.. and the protracted disinformation campaign goes on.

Good to see, when finally some evidence is shown. That the whole M14's accusations were pure lies, as usual.

The resistance brigades were formed to do deeds like this one. Do the dirty work for HA without implicating the Iranian resistance.

Yet helicopter, your accusation doesn't add up to the facts. Abdullah Azzam Militants, are the ones that sworn to destroy the Resistance in Lebanon. Why would they kill Shatah? Mainly to create secterian strife.

You know Mystic and this is true: I know someone who has spent a lifetime lying, then as he grew older, one fine day he decided to start being truthful. Good move it was from him, but then, no one would believe him anymore. Sadly for Hezbollah, it now finds itself in the same predicament, in such a case, who can believe it anymore? You see Mystic, when someone lives inside the shoes of his master, life will never be comfortable, and it will always be a bumpy ride. On a last note, haven't people like you noticed how people like me gradually lost all respects to Hezbollah? The time has now dawned for reflection instead of procrastination, the red carpet is now too littered for and by HA's partisans.

Mystic I'm glad you are keeping the tradition of embarrassing himself alive.

remember what you said here
http://www.naharnet.com/stories/en/117823

Ops, finally some evidence showing you are nothing but a fool!

It didn't take the damned STL, to find that out. Our beloved LAF took care of the job, and it didn't take millions of tax payers money neither.

just biased reports from elmanar and al akhbar... are they conducting the investigations? poor miss tic.

what a relevant comment peace. and so witty it almost makes us forget you have nothing to say.

Sunday. “The [Syrian] regime has come to an end,” he added.

The recent statement by the al-Qaeda-linked Abdullah al-Azzam said that the brigade had received an offer by Hezbollah and the Syrian regime to “assassinate Druze leader MP Walid Jumblatt in return for the release of a number of jihadists in Syrian jails.”

There is no government or army .. wake up man .. Lebanon is run by Hizb . Hizb busy saving you from ISIS ..