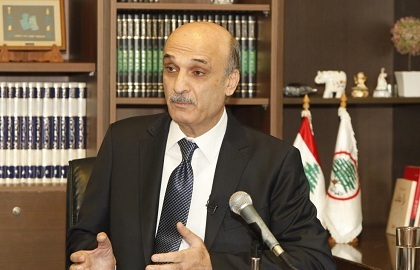 Lebanese Forces chief confirmed on Wednesday that talks with the Free Patriotic Movement leader MP Michel Aoun are serious, pointing that Hizbullah's involvement in the war raging in the neighboring country Syria has engaged Lebanon in turmoil.

“Dialogue between us and the FPM is very serious but the matter is not that easy. We have been at loggerheads for 30 years and it was not for simple or ridiculous reasons,” said Geagea in a press conference at Maarab following a postponed parliamentary session to elect a president.

“We were at conflict for fundamental reasons related to the nation and the priorities, but we have no personal enmity,” added Geagea.

Preparations are underway for a meeting between Aoun and Geagea to resolve points of contention between the old time rivalries.

“Boycotting sessions to elect a president is unacceptable,” he expressed.

Lebanon has been living in a presidential vacuum since May when the term of Michel Suleiman's ended. Conflict between the rival March 8 and March 14 alliances have prevented an agreement on a head of state.

On the efforts to hold meetings between the two parties, Geagea said “We want to vent the tension prevailing at this stage and to normalize relations between the Lebanese Forces and the Free Patriotic Movement.”

“We are trying to narrow the distance between the two parties. Yesterday we exchanged messages in a bid to normalize relations, put off tension and drop lawsuits, which all seriously serve the meeting,” he said adding that he has no problem on where the meeting will be held.

Geagea agreed on Aoun's latest statement saying “I agree with Aoun when he said that he wants the republic first and then the presidency. What Aoun said is very genuine and we agree.”

“We cannot tolerate the burden of Syrian refugees and I support the government’s measures to control their influx.”

Hizbullah sent fighters to Syria to back President Assad's forces against rebels trying to remove him from power. The armed intervention in Syria earned the group the enmity of Syria's predominantly Sunni rebels. Assad is a member of the Alawite sect, an offshoot of Shiite Islam.

However, Hizbullah's involvement in Syria had drawn the ire of many in Lebanon.

I wonder what you are doing flamethrower as you rest in pieces and tranquility at your final destination.... RIP

What if he received orders from Ebola to stay quiet?

i will never vote for a bobi would you?

More seriously, the best scenario that could happen to Lebanon is when leaders (christians and muslims) will stop obeing to outside orders. Stop being agents, Stop getting money, stop getting weapons, stop executing external agendas. This is called independence, freedom and neutrality. Outside this scenario all leaders will continue to being corrupt and will continue destroying Lebanese interests.

takfirilover, just incase you didn't know. The Resistance are all Lebanese, even if you reject that fact, everyone knows it to be true.

Foreign occupation no, and Geagea right there was for foreign intervention in Lebanon by both America and Israel back in the day, he probaly still is.

Mystic the "resistance" is not all Lebanese, because only Hezbollah and their associated saraya are allowed to carry weapons, while all other Lebanese are arrested for carrying illegal arms (notice how I didn't say only Shi3a are allowed to carry weapons). The Shi3a are not the problem. Hezbollah's weapons are the reason why this country is divided. You can argue all day trying to justify their weapons, but the fact is half this country thinks their weapons are no longer legitimate i.e they're using them on Lebanese instead of the "Israeli enemy."

We've had this conversation, for quite some time now. You keep writing the same, so I will do it too.

To resist takfiris, before they takeover Lebanon, is not an invasion. Especially not, when the Syrian government themselves, invited the Resistance to aid them.

Just like Syria supported the Resistance during the 2006 war, now we support them in their struggle. Unlike the M14, whom cheered and hoped for Israeli victory.

Why did your so called Ouwwet, not resist Israel & USA invasions? Because they worked with them all along, and the Phalangists are the lackeys of the Zionists.

You are not a resistance, when you pledge Israel and USA to take over Lebanon.

Why can't Hezbollah be entirely deployed on the borders inside Lebanon? Because that would be resisting. That would be resisting a takfiri invasion, not preemptively striking them outside of Lebanon. Preemptively striking someone is not resisting, it's attacking. And it doesn't matter who's an ally of Hezbollah (Daesh could be Hezbollah's ally and Hezbollah can attack Assad for all I care). The point is they are attacking somebody outside of Lebanon, which invalidates their claim to be "resisting"

Don't be ridiculous. You rather want us all to sit on our hands, while the takfiris slaughter us all? Whether they resist or not is your personal opinion.

I would certainly look forward to see, how many of you power hungry, LF and Kataeb people would flee to the West, as soon as your areas were endangered by da3esh, not all of us are rich & have this opportunity to flee as you do.

The latest incident in France, shows that takfirism is spreading everywhere. It makes no difference that the Resistance is in Syria, the takfiris would've attacked anyway.

Why don't you answer my question about Ouwwets alliance with Israel/USA?

And the argument started when you said "the Resistance are all Lebanese." We're discussing the definition of "resistance."

What determines if one is a resistance is not just about allegiances, it's about where and what they're fighting for.

Going to Syria to prevent a takfiri invasion is still illogical. Hezbollah can easily deploy 20,000 men on the Lebanese frontier and protect the borders from an invasion. But they're not, they're just fighting on Iran's orders to help Assad.

If it was really about takfiri, they'd have secured our borders instead of inviting takfiris

You really think it's a coincidence that after Sayyed Hassan publicly acknowledge his party's involvement in Syria, the bombs in Dahye started? Are you really that naive to think that was a coincidence? Hezbollah wants takfiris to come because it gives Hezbollah yet another reason to keep their weapons

Aha, what do you call the U.S coalition airstrikes then? Is that Resistance outside their borders? Don't play the hypocrite western game with me nickjames.

The Ouwwet -- Bashir called them the mou2awame al-Lebnaniyeh -- were opposed to the Palestinian presence. They resisted the Palestinian presence, and afterwards the Syrian presence. Say all you want that he was an Israeli collaborator, but the Ouwwet never went to fight outside Lebanon. They stayed in Lebanon because they were a "resistance." You cannot resist something that is outside your country, that's attacking.

It's funny how you two still ignore one fact: Hezbollah could fight off a takfiri invasion by being deployed inside Lebanon...

Dialogue 3ala rasy w3ayni. Dialogue for the sake of mellowing opinions is always welcome. But when dialogue becomes the only way to accomplish something because some parties choose to trample on the consitution and the rule of law then this is as unhealthy state as it can be. Allah yestor.