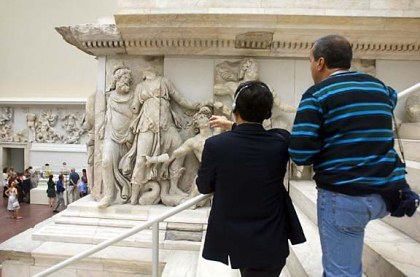 A major new exhibition offering a glimpse into life in the ancient Greek city of Pergamon opened here Friday.

Visitors to Berlin's Pergamon Museum will be treated to a 24-meter (80-foot) high 360-degree panorama of the city in modern-day Turkey from the year 129 AD.

Created by Berlin-based artist Yadegar Asisi, the panoramic view in the museum's forecourt is accompanied by a light and sound installation.

It provides a snapshot into life in the ancient city, from a visit by Roman Emperor Hadrian to a festival honoring the god Dionysus, or the bustle at the market.

The Pergamon Museum on Berlin’s famed Museum Island is home to the Great Altar of Pergamon, a sculpted frieze dating from the 2nd century BC from the terraces of the acropolis, which was brought to Berlin at the end of the 19th century.

The exhibition runs until September 2012.