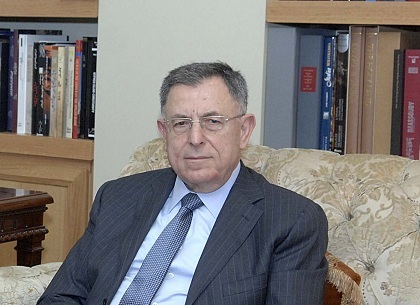 The Special Tribunal for Lebanon canceled on Friday next week's sessions after head of al-Mustaqbal parliamentary bloc and close friend of assassinated Prime Minister Rafik Hariri, Fouad Saniora, requested to postpone it for health-related reasons.

According to a statement issued by Saniora's press office, the ex-PM filed a request to postpone his testimony before the STL for health reasons.

“He didn't refuse to testify,” the statement stressed.

Saniora was a close friend to Hariri and his adviser. He was appointed as Minister of Finance in Hariri's successive cabinets and was the Chairman and Managing Director of Groupe Mediterranee.

In November, MP Marwan Hamadeh paved way to tackling the political motivations linked to the assassination of Hariri in 2005.

The in absentia trial of four Hizbullah members accused of murdering Hariri in February 2005 kick off at the STL in The Hague in January 2013.

The blast killed 22 people including Hariri and wounded 226.

Although the attack was initially blamed on four pro-Syrian Lebanese generals, the court in 2011 issued arrest warrants against Mustafa Badreddine, 52, Salim Ayyash, 50, Hussein Oneissi, 39, and Assad Sabra, 37, all members of Hizbullah.

The four suspects were indicted in 2011 with plotting the attack, but have not been arrested. A fifth, Hassan Habib Merhi, was charged late 2013 in the case and is also still at large.

The March 14 alliance that was produced in the aftermath of the assassination accuses Syria of being behind the murder and string of other assassinations that have plagued Lebanon over the years.

Yes he is sick indeed. He should stay at home, for the rest of his time.

That would be convenient for Hezbollah, wouldnt it? Is this the price that the victims have to pay to prevent more assasinations?

...of course he is sick of lying to himself ...consequently to others (-:

Fouad Saniora were among the treacherous politicians, during the 2006 war. He and his clan (M14) kept telling the Resistance to restrain themselves and drop their weapons, while bombs were being dropped upon us all.

M14 are nothing else, but a bunch of backstabbers. STL are the tool of the zionists to smear the Resistance, and this guy among many others is their humble slave, willing to testify to all the Israeli lies.

May he get well soon...Lebanon can't afford not having "hearsay" testimonies told.

So according to some we should just sweep this stl under rug and just forget about it . if this happened to one of your relatives or friends would you accept it and if you would'nt accept how would you go about the whole thing please enlighten or is your hatred so much it blinds your judgement (the_roar , mystic, cftc,) please offer us some of your wisdom.

Hope God punishes the people behind all the bombs against Rafic Hariri, Renne Mo3awad, Walid Eido, Jebran Twieni, May Chidiac, Marwan Hamadeh, etc etc etc
Hope that people who put bombs against rhe PEACE keeping forces that were deployed in lebanon will get punished starting with Beirut airport bombing French and Italian and US embassies.
Hope that peple behind all the kidnapping and suffering of Lebanese and foriegnors dying in prisons get their fair punishment in our life time.
Hope that people provoking Wars, and looking for making our lives miserable will get what their wish turned on them, and hope they rot in hell.