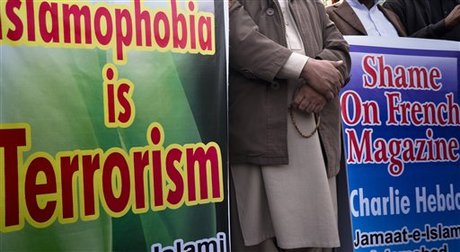 Muslims marched Friday in Middle Eastern cities against a new cartoon of the Prophet Mohammed published by French magazine Charlie Hebdo, as Gulf states warned the drawing could fuel hatred.

The largest rally was in Jordan, where around 2,500 protesters took to the streets of the capital Amman amid tightened security, while demonstrations also took place in east Jerusalem and Khartoum.

The crowd, including members of the Muslim Brotherhood and youth groups, set off from al-Husseini mosque in central Amman holding banners that read "insulting the prophet is global terrorism".

The latest issue of Charlie Hebdo, published on Wednesday, features a cartoon of the Prophet Mohammed on its cover holding a "Je Suis Charlie" sign under the headline "All is forgiven".

It was the first edition of the satirical magazine to be published since Islamist gunmen killed 12 people in an attack on its Paris offices on January 7 over such cartoons.

The image has angered many Muslims as depictions of Mohammed are considered forbidden in Islam.

Qatar condemned what it called the "offensive" cartoon, which was also reprinted by several European papers in a show of solidarity with the victims of last week's attack.

"These disgraceful actions are in the interest of nobody and will only fuel hatred and anger," the foreign ministry warned, describing them as a "violation of human values of peaceful coexistence, tolerance, justice, and respect among people."

Bahrain's foreign ministry echoed the warning, saying publication of such cartoons "will create fertile ground for the spread of hatred and terrorism".

Charlie Hebdo's latest cartoon is "disgraceful" and no more than attempt to "provoke" Muslims and "mock" their beliefs, it said.

Both Qatar and Bahrain had sent representatives to a massive march in Paris Sunday in support of free speech, alongside French President Francois Hollande and many other world leaders.

Jordan's King Abdullah II, who also attended the weekend march against terrorism, on Thursday said the latest issue of Charlie Hebdo was "irresponsible and reckless".

Hundreds of Palestinians demonstrated at Jerusalem's flashpoint al-Aqsa mosque compound Friday, some with banners reading "Islam is a religion of peace!" and "Our leader will forever be Mohammed".

Israeli security forces, which control access to the compound -- the focal point of months of Jewish-Muslim tensions in the Holy Land -- said Friday prayer passed off without incident, and there were no initial reports of violence linked to the demonstration afterwards.

In Khartoum, hundreds of demonstrators poured out of the Grand Mosque and marched across the adjacent square, chanting "Expel the French ambassador, victory to the Prophet of God!", an AFP correspondent said.

In Lebanon's northern flashpoint city of Tripoli, 70 people staged a march carrying banners bearing the name of the prophet and chanting "Allahu Akbar" (God is Greatest).

In Baddawi, on the northern outskirts of the city, prayer leader Sheikh Mohammed Ibrahimi addressed hundreds of worshipers saying: "May God punish this newspaper and those who back it".

A protest against the cartoon in Tehran was canceled, with no official reason given, as senior Iranian cleric Ayatollah Ali Movahedi Kermani told worshipers its publication amounted to "savagery".

In Tunis, worshipers at El-Fath mosque interrupted prayer leader Noureddine Khadmi as he delivered a sermon saying: "We are all against insults made against our prophet but it is not a reason to kill".

Charlie Hebdo journalists "deserved to be killed because they insulted our prophet many times," the worshipers cried out.

Saudi Arabia's top religious body, the Council of Senior Ulema, also criticized the new publication of Mohammed cartoons that it said "have nothing to do with the freedom of creativity or thought".

Its secretary general Fahd al-Majid warned that publishing such images would only "serve extremists who are in search of excuses for killing and terrorism".