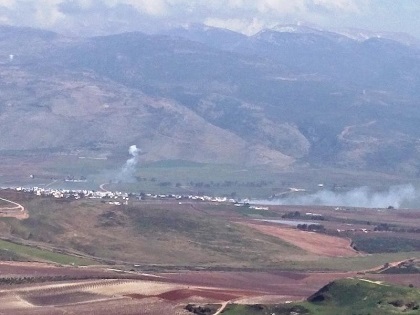 Lebanese Forces leader Samir Geagea and Progressive Socialist Party chief MP Walid Jumblat were quick to react on Wednesday to Hizbullah's attack against an Israeli military vehicle in the Shebaa Farms, warning that Lebanon is headed towards a “turbulent” period.

Geagea said during a press conference: “Hizbullah does not have the right to involve the Lebanese army and government in a battle with Israel.”

“The cabinet and parliament should decide such affairs,” he added.

He warned that the Shebaa attack will have “dangerous repercussions on the Lebanese government and people and it could also have consequences on the army.”

Hizbullah claimed responsibility for the attack against an Israeli military vehicle in the occupied Shebaa Farms that left at least six Israeli soldiers wounded.

The party explained that it was in response to a January 18 Israeli airstrike on the Quneitra region in Syria's Golan Heights that reportedly left six Hizbullah members and an Iranian general dead.

Geagea continued: “The Lebanese government and people will bear the consequences of the Shebaa attack.”

“How can Hizbullah take such a step in Shebaa given its dialogue with the Mustaqbal Movement?” he wondered.

He questioned the purpose of the dialogue given “the party's expansionist plans in the region and the Shebaa Farms attack.”

“We were pleased with the talks, but it appears that Hizbullah is not being at all honest in its actions and claims,” Geagea stressed.

Its presence in Quneitra does not serve Lebanon or Palestine, but Iran's ambitions in the region, he remarked.

For his part, Jumblat expected that Lebanon will “enter a major turbulent phase” in the wake of the Shebaa operation.

He noted that Israeli Prime Minister Benjamin Netanyahu is seeking to make political gains through the Quneitra airstrike.

“Precautions should be taken should Israel launch an offensive against Lebanon,” said the MP.

In the evening, Jumblat took to Twitter to point out that "it is clear that the resistance's operation has reminded Israel that playing with fire is costly, but this does not prevent taking the necessary measures to confront any aggression."

However, he noted that "the operation occurred on Syrian soil seeing as the border is yet to be demarcated, and this was a very important, smart move."

Earlier on Wednesday, Speaker Nabih Berri tackled the operation during his weekly meeting with lawmakers at his Ain el-Tineh residence.

He confirmed to the gatherers that the attack took place on Lebanese territory.

Netanyahu had said in the wake of the Shebaa attack that “Israel is ready to react forcibly wherever it comes under attack.”

I repeat it for the 1000 time: Israel AND Ebola want the destruction of Lebanon.

operative word here is "1000 time". you could either try to go for the 1,000,000th time, hoping it will make it any truer, or maybe you should try something else like getting a brain.

as for petit samir, he is cute when he says, “The cabinet and parliament should decide such affairs”.
As if are letting the government or parliament make any decision at all.

that's a lot of 0's in there, i see you spoke your mind fully lol

Sayed Hassans stands by his words, Israel is in panic now, and so is all their stooges in Lebanon. Geagea is in shock, just like the rest of M14 Israeli lovers, you didn't expect this to happen, guess what your demigod zionists are not untouchable as you thought.

If Israel decides to release their full airforce now all over Lebanon, then the Resistance will release rain of fire on Tel Aviv and the rest of Israel, Iron dome systems will not save them.

Geagea said during a press conference: “Hizbullah does not have the right to involve the Lebanese army and government in a battle with Israel.”

Hizbullah is NOT a lebanese party, its followers are only lebanese on their ID cards, and it answers only to Iran.

this is absolute truth. Ebola is an Iranian army.

And that is why, my dear Lebanese friends, I want Israel to wipe Dahieh off the face of the Earth, once and for all.

God, I so hate Ebola right now, it almost hurts...

" I want Israel to wipe Dahieh off the face of the Earth, once and for all." >>> and that's exactly why no lebanese care what you think. you're an israeli, or worse, an israeli lebanese stooge & traitor.

Any follower of Caporal, who is himself the servant of Ebola, is a traitor to Lebanon.

Dear traitor,
what do you answer to the fact that Ebola wants the destruction of Lebanon?

lol, thanks for confirming all suspicions. by loving saudis, israelis and takfiris at the same time, you prove these 3 are in bed together.

isis, nusra, Israel, hizbushaitan and fpm are ne and the same.
they all want Lebanon destroyed.

Hopefully this latest conflagration will end where it started.
Hezbollah's obvious attempt to divert from the Syrian disaster and to reclaim its "Resistance" status has put Lebanon in extreme danger.
Let us all pray for Israeli restraint, because this time, no country will come to aid Lebanon.

How can we accept that Ebola decides for our life and death?

Listen to Jumbo. He has the exact info from the Druze of Israel.

Sorry dude I cannot take credit for this gem, this comes to us courtesy of the mouwatens of Dahieh or more accurately the squatters who occupied and illegally build on confiscated Christian lands on the outskirts of Beirut.

Cowards and Traitors! Your words are loud and clear Nahar goons! You can be a M14 but to support ISRAEL over your own people shows many of your true colors!! Hamdillah the lines between Good and Evil or so clear and you, you filthy scum have chosen your side!

The people will resist and survive...ONLY the collaborators will have the final ENDING...Remember Vietnam, Algeria, Cuba, Nicaragua, ETC

Geagea AND all Arab Collaborators: "Israel has a right to attack and kill anywhere in the World while Arabs are ONLY allowed to attack and kill fellow Arabs to serve the interest of the Israeli enemy" (talking about failed SLAVE state).

Small john
these are emotions...not reality. You are filled with hatred.

I agree. This is Lebanese land, but that's for the army to act on with consensus from the government. As for the six lebanese civilians who were killed by Israel, they were engaged in a terrorist act against against our neighbours. Israel is a crap country who did us a favor.

Flamer don't start talking about other people's mothers. The last time someone talked about your family you started crying and claiming war on the forum against all of ashrafieh. We all lament for your family's confusion on Father's Day man.

Hizbullah' respose is very understandable. The timing is not right while this party is also fighting those extremists who threaten Lebanon.

Sheba farms is Lebanese land and I support the reclaiming of all lebanese and Palestinian land, but that's for the army to act on with consensus from the government. As for the six lebanese civilians who were killed by Israel, they were engaged in a terrorist act against against our civilian neighbours. Israel is a crap country who did us a favor.

Flamer don't start talking about other people's mothers. The last time someone talked about your family you started crying and claiming war on the forum against all of ashrafieh. We all lament for your family's confusion on Father's Day man.

Truth hurts. You hate so much Geagea that you are unable to see the enemy from within destroying the country you are supposed to love.
I pity you. Really.

Extremists battling it out...what a waste of lives, time and money!
Unfortunately, the innocents always pay the price of the adventures of Israel and Hezbollah!
Both Netanyahu and Nasrallah, their popularity having greatly suffered in the last few years, stand to win from this charade. They both needed this Shebaa jolt.
What a bunch of murderous vultures!

i agree with you. I think the most they will do is another targeted strike. No way HA is stupid enough to start another war. They knew 100% this will not lead to war.