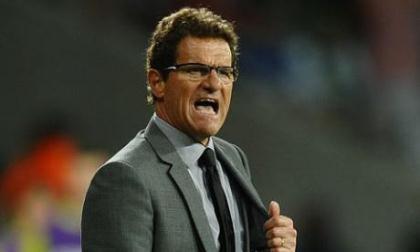 Capello has revealed his intention to step down following the conclusion of England's Euro 2012 campaign, but recent reports suggested some key figures in the FA are keen for him to remain in charge.

However, Bernstein, speaking at the Leaders in Football conference in London on Wednesday, made it clear the former AC Milan and Real Madrid coach would not be extending an England reign that began in December 2007.

Bernstein also responded to the widespread belief that the FA will offer Tottenham manager Harry Redknapp the chance to replace Capello by admitting his organization had not started the search for the 65-year-old's successor.

"It is not something on our agenda at the moment. You can't be half-pregnant at these things," he said.

England can book their place at Euro 2012 with a draw against Montenegro on Friday and Bernstein insisted the FA were determined to learn the lessons from the team's woeful 2010 World Cup campaign when they get to the finals in Poland and Ukraine.

He said they would not keep the team isolated in their hotel during Euro 2012 -- as happened in South Africa -- and suggested the squad would be given more opportunities to venture out into the community.

Bernstein said: "There are many lessons to be learnt from last year's World Cup experience and, believe me, these are being taken fully on board.

"We are placing far greater emphasis on what we can do to provide an enjoyable environment and experience at tournaments.

"We are determined our teams will fully embrace being involved at World Cups and European Championships, be good tourists engaging with fans, staying more centrally and not being isolated."