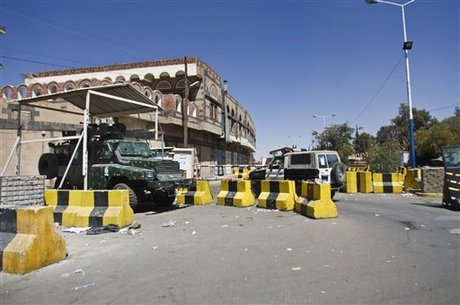 The United States, Britain and France said they were closing their embassies in Yemen over security fears Wednesday as thousands took to the streets for rival demonstrations over a takeover by a Shiite militia.

U.S. embassy staff were quickly evacuated, even leaving diplomatic cars and armored vehicles behind at the airport that were seized by the militia.

Long on the front line of the war against al-Qaida, Yemen has descended into chaos since the militia, known as Huthis, seized the capital Sanaa in September and last week announced they had taken power.

Protests against the Huthi takeover erupted in several areas on Wednesday, with thousands demonstrating in cities including Baida, Ibb, Hudeidah and the main southern city of Aden.

In Sanaa, the militiamen fired warning shots and used batons and daggers to disperse several hundred protesters rallying against them, wounding at least four people, organizers and witnesses said.

Militia leader Abdulmalik al-Huthi had urged supporters to rally on Wednesday -- the fourth anniversary of the uprising against Saleh.

The deep divisions in Yemen, which is beset by tribal rivalries and awash in arms, have hampered efforts to bring the strategically important country out of crisis.

The United Nations has demanded the reinstatement of Saleh's Western-backed successor Abedrabbo Mansour Hadi -- who is under effective house arrest -- but its efforts to broker a deal between the militiamen and their opponents have failed.

The Huthis upped the stakes last week by forming a presidential council and a security committee in a move widely denounced as a coup.

They continued to seize more territory in the Sunni-majority country this week, sparking fears of a backlash from Yemen's feared al-Qaida branch.

Washington said it was closing its embassy in Sanaa indefinitely due to the "deteriorating security situation" and evacuating its staff from the country.

The State Department urged U.S. citizens to defer travel to Yemen and for those in the country to leave.

Yemeni soldiers were seen deployed around the U.S. mission in Sanaa on Wednesday.

But the militiamen seized some 30 vehicles used by U.S. embassy staff from Sanaa's international airport shortly after their departure from Yemen, diplomatic and airport sources said.

As well as three cars used by Ambassador Matthew Tueller and his staff, the militiamen seized more than 25 vehicles used by Marines in charge of embassy security, sources at the airport said.

Marine guards at the mission "destroyed their weapons, sensitive documents, telecommunications equipment, computers, telephones and photocopiers before leaving the embassy," one of them told Agence France-Presse.

Another employee said they "destroyed everything they couldn't take with them," including numerous vehicles, which they crushed with a wrecking crane.

Britain too evacuated its diplomats, with a senior official saying: "Regrettably we now judge that our embassy staff and premises are at increased risk."

France called on its 100 or so citizens in Yemen to leave the country and said it would close its embassy from Friday over mounting security fears.

The Arab Spring protests of 2011 had raised hopes of democratic reform after more than three decades of ironfisted rule by Saleh.

But his departure from office the following year left a power vacuum that the Huthis and al-Qaida have vied to fill.

Washington has been at pains to stress its battle against the jihadists' Yemen branch will go on regardless of the outcome of the struggle for power in Sanaa.

U.S. President Barack Obama vowed on January 25 not to let up in Washington's campaign against Al-Qaida in the Arabian Peninsula, which had claimed responsibility for last month's killings at satirical magazine Charlie Hebdo.

Washington considers AQAP the jihadist network's most dangerous branch after repeated attacks and attempts against targets in the West.

The exodus of Western diplomats came despite pleas from Huthi that the security situation in the capital was stable.

"Some people are raising concerns among diplomatic missions so that they flee the country," the militia leader said on Tuesday.

"These fears are unfounded. The security situation is stable."

Huthi, often accused of receiving support from Tehran, has repeatedly portrayed the militia's advance into Sunni-majority areas as a battle against jihadists and called for Western support.

But Hadi loyalists insist only his restoration can prevent a collapse of central authority that will hamstring the war against the jihadists in Sunni areas.

U.N. envoy Jamal Benomar brokered talks between the opposing factions this week but with no signs of progress.

He had been due to brief the Security Council on his efforts Wednesday but the briefing was postponed by a day.

When the huthis were demonstrating against nobody knows what, it was ok and democratic. When others demonstrate against them they get killed, beaten up, and arrested.

lol which planet do you live on? between 2011 and 2012, during the protest by opposition parties (which included, but were not limited to, houthis) at least 2,000 people were killed and 20,000 wounded. Here nobody got killed and 4 were wounded (which is very little if you look at protests around the world, including in the so-called democratic US&A)