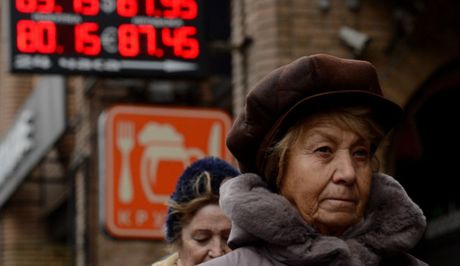 Russia's ruble and stock market showed renewed weakness Tuesday in response to another slide in the price of oil and a downgrade to "junk" status of its sovereign debt by Moody's.

The global rating agency announced after trading in Moscow finished on Friday that it expected Russia to experience a "deep recession" this year and continued economic contraction in 2016.

Russia's markets were closed for a public holiday on Monday and the ruble only traded over the counter in thin volume.

But the ruble on Tuesday was down nearly two percent against the dollar from Friday's close.

The Russian currency lost almost a percent against the euro while Moscow's two main stock exchanges were both down about one percent.

Traders attributed the declines to both the rating cut and another drop in the global price for Russia's vital oil exports.

Moody's downgrade came slightly less than a month after an identical one by Standard & Poor's.

Most major Western funds are forbidden from holding debt stripped of its investment-grade status by two of the world's three main rating agencies.

VTB Capital said Moody's decision appeared to be based on the assumption that Russia's net capital outflows -- estimated at around $150 billion last year -- would nearly double to $270 billion in 2015.

"This seems extreme, as it would be more than 80 percent of local currency term-deposits in the banking system."

Siluanov also argued on Friday that Moody's prediction of the inflation rate reaching 22 percent this year was overly pessimistic.

"Russia in recent months has demonstrated stability in the face of unprecedented external shocks," he said in statement.

Others said the cut meant that Russia's investment climate would remain troubled even if the European Union eased back some of its Ukraine-linked sanctions in the coming months.

"This cements Russia's loss of investment grade, meaning that even under the optimistic case of sanctions being eased and the oil price recovering, reinstating financial capital inflows to Russia will remain a long-term challenge," Alfa Bank said.

Russia at first appeared uncertain about how to cope with the double-edged sword of soaring inflation and plunging economic output.

Consumer prices shot up by 15 percent in December and have grown another five percent since the start of the year. The economy in turn is expected to shrink by three to five percent in 2015.

The central bank shocked the market in mid-December by hiking its key rate to 17 from 10.5 percent in a desperate bid to save the Russian currency -- stripped of half its value since the start of 2014 -- from even further declines.

But it appeared to be responding to growing pressure from the Kremlin and Russia's cash-strapped business community by trimming the rate back down to 15 percent at the start of February.

"We must pursue a tough monetary policy," he told a meeting of top tax officials.

"We must adjust our budget and economy to new conditions, irrespective of what decisions rating agencies make."