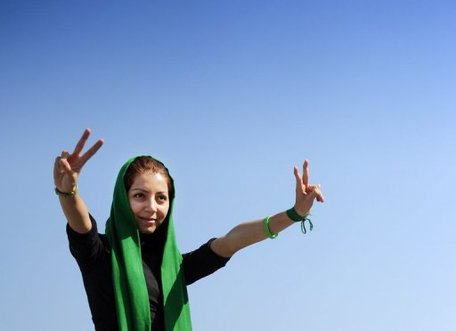 The director of an Iranian film documenting violence in the run-up to the 2009 presidential vote has been banned from travel to Lebanon, where his film was set to be screened, an organizer said on Sunday.

"Today we found out that Iranian director Nader Davoodi will not be allowed to travel to Lebanon," said Colette Naufal, director of the Beirut International Film Festival which runs from October 5 to 13.

"Lebanese censorship authorities on Friday requested they see Davoodi's film 'Red, White and the Green' prior to its screening. We informed them that we decided to pull it from our program," Naufal said in a statement.

The 2010 film, to be screened as part of the festival's "Middle East Documentary Film Competition," focuses on the violent events of the last three weeks leading up to the June 2009 re-election of President Mahmoud Ahmadinejad.

Hizbullah, a major ally of Iran, leads the governing coalition in Lebanon, where authorities were not immediately available for comment on the film.

The news comes four months after the banning of "Green Days" by Iranian filmmaker Hana Makhamalbaf that shows raw footage of security forces cracking down on protests after the disputed election.

Makhamalbaf is a daughter of Mohsen Makhamalbaf, who is close to leading Iranian opposition leader Mir Hussein Moussawi, one of Ahmadinejad's challengers in the 2009 election who cried fraud when official results gave him victory.

lol, someone afraid of the truth??

Hizbala has made lebanon into a puppet state. Screw this gvrmt. Berri you are a cancer, sitting in the same chair ruling over a bunch of sell-outs for the past 20 years. Nosralla u are the lowest human, you are the top Mossad agent in the world, helping the Jews to divide and conquer. If you are pro militia weapons, screw you too! You ruined our country, but your time is running out!

and will know more and more about what is in faqih's mind !!

Guess who is the Chief Head of General Security..... a Shiite appointed by Hizbullah vis-a-vis IRAN....!

this is called democracy and liberty the M8 way with the benediction of aoun....

This is the new lebanon that the GMA wants, where army officers are shot dead without reprecussions (samir hana) and where israeli top brass spies get only two years in jail (fayez karam) and where people are divided into 1st class (hizzies) and 3rd class (the rest)

The light of the truth will always burn through the shades that they try to cover it with.

Back to the good old days of censorship and Lebanon being a 3rd rate country that censors even political documentaries about another country's government.

The Hexx don't want the people to know the evil they are funded and guided by. Not to fear. I will get a copy of the film and let everyone I know see it.

So again this friggin Hizbulla junta in Lebanon is dictating what Lebanese can and can not watch... Also anything that would expose the despicable image of the current Iranian regime... This is the 21st century folks and the power of counterfeited DVDs will not stop anyone from watching this film just like nothing can stop net browsers and FB addicts from fully knowing what dictators are doing to their population...

exchanging a foreign dictatorship for a local one... it's a shame what Lebanese have done since 2005...
what a bunch of idiots, like banning this movie will prevent people from watching... just like any other movie, it will be pirated and spread to all Lebanese as soon as it opens...

exchanging a foreign dictator for a local one... is this the change Lebanese have accomplished since 2005 ???? what a shame...
what a bunch of idiots... like this movie won't be pirated and spread to everyone in the countless DVD sales places... in fact banning it have the opposite effect that they are trying to avoid...

don't they realize that the propaganda that comes with such a ban would actually make everyone out there want to see the movie? it's the best form of advertisement for these movies! idiots!

chou ya habal? Give us a clear statement here! Do you think that the movie should have been aloud?

We are turning into Iran more and more every day. Time for real resistance

It is true as many have said here; banning it is the best thing that could happen to this movie..... Every one will see it. If it wasn't banned, wouldn't have heard about it.....

Speaking of this movie, I hear that a revolution in Iran is on the verge of exploding and will be far more organized this time!

M8 guys round here say nothing? they can t assume? censorship only happens in totalitarian countries....