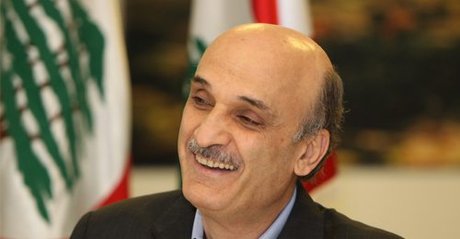 Lebanese Forces leader Samir Geagea announced Friday that the ongoing dialogue with the Free Patriotic Movement will eventually lead to “joint political steps,” noting that Hizbullah chief Sayyed Hassan Nasrallah is harming Shiites and all Lebanese through his group's intervention in Syria.

“Popular bases in Lebanon interact with their leaders and they will see how the LF-FPM dialogue will be translated into joint political steps,” said Geagea in an interview on al-Jadeed FM radio.

Asked about his relation with Aoun, Geagea answered humorously: “Every 'love story' starts with a glance and a smile before evolving into a 'date' and we're still in the 'glance-smile phase.'”

LF media officer Melhem Riachi and MP Ibrahim Kanaan of the FPM have recently started a series of meetings away from the media spotlight at the behest of both Geagea and Aoun. The talks are being held amid a protracting presidential vacuum that started with the end of Michel Suleiman's term on May 25, 2014.

The two parties have announced that they are preparing a so-called declaration of intent paper.

Asked about Hizbullah, the LF leader said “a lot of issues that Sayyed Hassan is speaking of contradict with our view of Lebanon.”

“I cannot accept Hizbullah's intervention in Syria and we're at odds today because of essential differences,” added Geagea.

Addressing Nasrallah, he went on to say: “You are harming Shiites in Lebanon and harming all Lebanese through your actions.”

“All Lebanese parties must not interfere in the regional schemes so that no one practices hegemony over Lebanon,” Geagea underlined.

In response to a question about al-Mustaqbal movement leader ex-PM Saad Hariri, Geagea stressed that “he is free and will remain free.”

“We're still in harmony as we were before,” he noted.

Geagea harms all Christians. Geagea follows the footsteps of Judas, backstabbing the followers of Christ, to pursue his own goals, and succeed with riches beyond imagination, made in Saudi Arabia.

Geagea sells Christianity in favor of Wahabism, and oil money.

This even looks like Geagea. To all real Christians, stop following a child murderer & Church bomber, start following the words of Jesus Alayhi salam instead.

Please ask your general Aoun to keep his promise and negotiate the release and immediate return of all Christian prisoners held in Syrian jails. After all his MOU with HA and his friendship with Assad should count for something no? Until then spare me your broken record and do something good for your country instead.

Do something good? By selling my culture and become an American like yourself Bandoul? No thanks my friend.

You are a takfiri, so what do you care?

Well paid? Because my words are true. Look at my link.

Geagea's contempt for democracy in theory matches his contempt for people in the concrete. Why should the Shia majority of Lebanon regard him as anything at all except a broken-down, worn-out warlord whose foreign paycheck is all that keeps him from the gutter? I mean it: why don't the people of Lebanon assert themselves? What are they waiting for? Down with Article 24 of the Constitution. Having already proved that democracy works in practice by expelling Israel in 2006, and now reversing the Gulf monarchies' plan to expel Assad from Syria, it is time for Lebanon's Shias to assume the dignity of legal representation their numbers deserve and justice demands. No more hiding in the underground.

Is it quantity or quality that counts. EBOLA took you 1000 years behind.

It looks like the shiites and aounists on site agree with chrisrushlau that christians are unjustly appropriating the god given rights of the shiites. That's why they never address any of his anti-christian unsubstantiated and untrue rants usually on stories pertaining to cardinal rahi or the pope concerns for lebanon. Nasrallah and aoun agree as well, which is why there's still no president, they want push a new constitution giving the shiites what's rightfully theirs the presidency and most of the seats in parliment and in the civil service!!!!
god bless democracy

Yes, it always starts with a glance, a smile, a date, and then someone gets fucked.

I just saw your post: right now. Look at what I have been writing. Exactly the same thing : Is it quantity or quality that counts? EBOLA took you 1000 years behind.

I keep laughing, that comment. Geagea protector of Children? Any reader on this forum knows, that Geagea was a sick black hearted killer, whom enjoyed destroying childrens homes, and rape their mothers. That is not something taken lightly, everbody knows Geagea is a massmurder, and all Christians whom follows him, sells their religion in favor of dollars $$$.