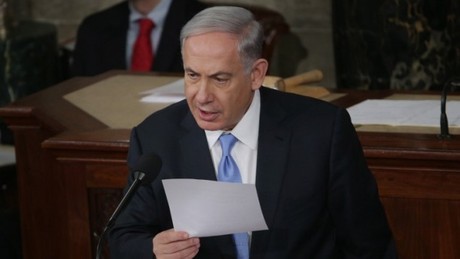 Israeli Prime Minister Benjamin Netanyahu denies reneging on a 2009 speech in which he acknowledged the need for the creation of a Palestinian state, a spokesman said on Monday.

Over the weekend a pamphlet distributed in Israeli synagogues including a Q&A with the main parties running in next week's general election featured a response by Netanyahu's rightwing Likud party to a question on the formation of a Palestinian state.

"The prime minister has announced to the public that the Bar Ilan speech is void," the Likud response read, in reference to a key address in which Netanyahu for the first time agreed to the need for a Palestinian state as part of a peace accord.

But Netanyahu "never said such a thing," his spokesman said, while stressing the time was not right for any territorial concessions to the Palestinians, a prerequisite for the formation of a state.

"Netanyahu has for years been stressing that under the current conditions in the Middle East, any territory that would be handed (to the Palestinians) will be seized by extremist Islamist elements," he said.

A Likud spokeswoman had earlier clarified that the remarks in the pamphlet did not reflect that positions of the party, and were the personal opinion of Likud hardliner Tzipi Hotovely.

Hotovely had also written in the pamphlet that "Netanyahu's entire political biography is a fight against the creation of a Palestinian state."

The question of a Palestinian state has hardly featured in the current campaign.

But political analysts say Netanyahu is better placed to form a parliamentary majority with support from ultra-nationalist and ultra-Orthodox parties.

Alternatively, Likud and the Zionist Union could join forces in a unity government.