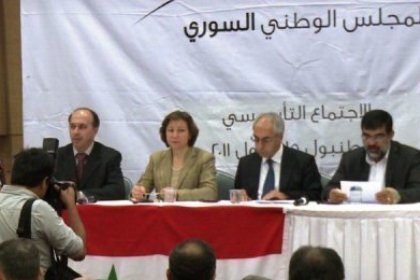 Libya's ruling National Transitional Council said on Monday that it recognizes the Syrian National Council grouping of opponents of President Bashar al-Assad as the country's government.

"The National Transitional Council has decided after a meeting today to recognize the Syrian National Council as the sole legitimate government in Syria," NTC member Mussa al-Koni told a news conference in Tripoli.

Koni, who represents Libya's Tuareg minority in the NTC, said the council has "also decided to close the Syrian embassy in Libya."

The decision makes Libya the first country to recognize the SNC as Syria's legitimate government, although the former is still only run by an interim council and still battling pockets of loyalists to the ousted Moammar Gadhafi.

Dissidents officially declared the formation of the Syrian National Council in Turkey on October 2, saying they had established a "historic" united front against Assad that brings in groups from across the political spectrum.

"The Syrian National Council reunites the forces of the opposition and the peaceful revolution," Paris-based academic Burhan Ghalioun told reporters in Istanbul, announcing the new umbrella movement which he called "historic."

He said the SNC aims to "mobilize all categories of people in Syria and give the necessary support for the revolution to progress and realize the aspirations of our people for the overthrow of the regime, its symbols and its head."

Apparently modeled on Libya's NTC, the Syrian council is to elect a president and have a 29-strong general secretariat representing seven of the country's opposition factions.

It comprises six members of the Local Coordination Committees, five Muslim Brotherhood and tribal representatives, four from the so-called Damascus Declaration and four for a liberal grouping led by Ghalioun.

The remaining members of the secretariat are five independents, four Kurds and a Christian.

And there goes a superb slap in the face of Bashar and Hezbollah!

Hope eygpt would be next and other more to follow like Tunis and who knows who would be next. slap bang slap slappppppppp

Assad.....you are cooked. But just to be sure let me stick a fork in you.

Had the sudden urge of clapping when I read this article. Now what Assad?

Aren't they affraid after how Almo3allem threatened those who recognized the opposition?
Amazing, they have the guts to comfront the great Assad who has been ending those "minor skirmishes by bands of agents" every day!

Excellent. Who's next? Tick tock

This was only step one. Bashar must read the writing on the wall

...and one Christian. LOL

Weinak ya geagea? You see what will happenn to the Christians? Or should they not fear, since geagea will save them? Cos that would mean they're dead or will be forced to leave, since geagea lost every war and for Ed the Christians to pay the heavy price, while he's a millionaire now.

Don't worry, there are Atheists in America who believe this fighting is pointless.

Some folks may make fun of this move, but the bottom line is that it is a way of pointing out that the Syrian people moves need recognition and those folks were in the same situation not long ago and no one took them seriously... However look at them now... You have to salute them for what they did... so Bashar and your junta are next and one of these days you will be hiding underground or hanging from the end of a rope like your old pal Saddam...

I think we should count down starting now