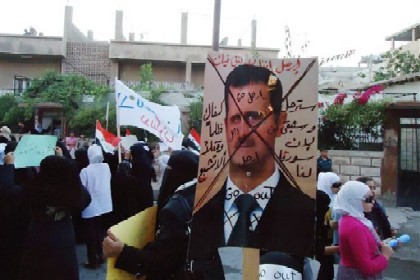 China urged Syria Tuesday to move faster to implement reforms, a week after Beijing infuriated the West by blocking a U.N. resolution against President Bashar Assad's deadly crackdown on protests.

It is the first time that China has veered away from its longstanding policy of non-interference in the affairs of Syria, which has been rocked by anti-government protests and violence since earlier this year.

"We believe the Syrian government should move faster to honor its reform pledges and swiftly start to push forward the inclusive political process with the broad participation of all parties in Syria," foreign ministry spokesman Liu Weimin told reporters.

Both China and Russia, veto-wielding permanent members of the U.N. Security Council, blocked the U.N. resolution last week, drawing strong condemnation from countries such as the United States and Britain.

But on Monday, Russian Foreign Minister Sergei Lavrov said Moscow and Beijing were ready to propose a new U.N. resolution on Syria that would condemn violence carried out both by Assad's regime and the opposition.

Liu said the original draft resolution against Syria "threatened to use sanctions".

"We believe this is not conducive to stability in Syria," he added.

Liu said China hoped the U.N. Security Council would "ease the tensions in Syria and help promote political dialogue", as Syrian opposition forces step up their efforts to unseat the embattled Assad.

"All parties in Syria should actively take part in the process of political settlement," he said.

Washington has renewed calls for Assad to step down immediately amid escalating violence against anti-regime protesters that the United Nations says has left nearly 3,000 people dead.

On Monday, the leader of the opposition Syrian National Council warned that Assad could suffer the fate of other "criminals" if his regime fell.

"If Assad falls without accepting his mistakes, his fate will be the same as those of any other criminal," Burhan Ghalioun told the Lebanese television network LBCI from Paris.

Syrian dissidents established the national council in Istanbul on August 23 to coordinate the campaign to topple Assad, and formally formed a common front uniting all groups that oppose his regime last week.

On Monday the European Union welcomed the creation of the grouping and urged the world to do the same, as it readied new sanctions against Assad's regime.

it looks like the window is closing for the assad regime :)

How could an autocratic regime promote democratic reforms? China's statements are hallow since they do not contain a time frame for the alleged reforms or an outline of these reforms.

Like i sad in previous threads, all china and russia want is to make a good deal with the west. They made their point, they will get what they want and bye bye Assad

It will take a while before all the Sunni crazies are flushed, but of course the sooner the better, and we should all help pursue the crazies to the end of the earth and terminate them ASAP.

@ Farido, are you habalamal but using a different name? stop insulting other religions and have some respect. Either you are empty and hollow or just full of $hit and spit..either way, you are the CRAZY one.

Now China is rolling against you Bashar. Look out. The US did not sell advanced F-16's to Taiwan.....maybe part of the deal is that you have to go. Even Hezzbollah is making plans with Iran for when you are gone.

the filthy zionist information war department has an illusion that assad will fall.

why don't you send army to ensure that?