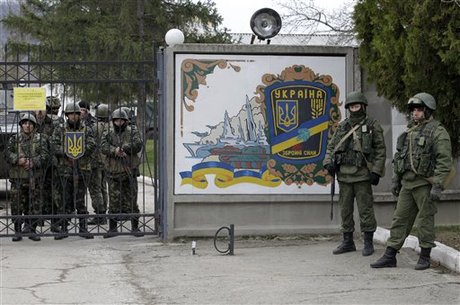 Crises have a way of focusing minds. So it was with Eskander Budzhurov's 80-year-old mother when her son left the Crimean peninsula in a rush after it was annexed by Russia from Ukraine a year ago.

Budzhurov, a spry owner of a booth selling traditional Crimean Tatar snacks in Kiev, laughs as he recalls the mad dash to make his mother Skype-savvy before setting off with two sons for a new life, 800 kilometers (500 miles) away in the Ukrainian capital.

"Two weeks before I left I started coaching her. I showed her where to turn the computer on, where all the cables go... And she began practicing writing messages," he said, miming her jabbing at the keys.

Crimea this week celebrates what President Vladimir Putin termed its "return home" to Russia -- the anniversary of a referendum to break off from Ukraine which was slammed as illegal by the West.

But thousands of Crimeans who voted with their feet to remain beyond Moscow's reach are mourning the loss of their home in the sun, and hoping for the day when the Ukrainian flag might be flown there again.

Many of those who left are from the Crimean Tatar minority, a Muslim community with a distinct language and culture, whose history on the peninsula dates back over 700 years.

Having been deported en masse to Central Asia by Joseph Stalin in 1944 -- only venturing back in the twilight years of the Soviet Union -- Tatars like Budzhurov, who make up around 13 percent of Crimea's population, vehemently opposed the return of Russian rule.

The decision to start over a second time, 25 years after moving to Crimea from Uzbekistan, was not an easy one, Budzhurov said, but the peninsula felt alien after the arrival of the "little green men" -- the mysterious men in military uniform, later confirmed as Russian troops -- who took control of the peninsula at the end of February.

"When we were living in Ukraine no-one was afraid to say anything" critical of the authorities, said the former manager of a hotel in the popular seaside resort of Sudak.

After the annexation, "the situation changed completely." Longtime acquaintances who had supported Ukraine's independence from the Soviet Union suddenly emerged as pro-Russian blowhards. Kiev loyalists like Budzhurov began speaking in coded sentences.

He eventually hatched a plan with his sons to head west and give Kiev a flavor of Crimean Tatar culture, on the go. "I have no doubt Crimea will return to Ukraine. This occupation is temporary," he declares as punters line up to collect Tatar cheburek -- a deep-fried turnover filled with minced meat and onions -- and flatbread yantyk pies.

The magazine editor and TV chef from the staunchly pro-Russian port of Sevastopol -- home of Russia's Black Sea fleet -- lost his job last year after his publisher pulled the plug on "pro-Ukrainian" media.

"It was like everything Ukrainian in Crimea was suddenly bad," Nilov, whose calls Russian his first language but grew up with a love of Ukrainian, says. "If you tell them that Crimea is Ukrainian you're called a separatist!"

After a near dust-up with pro-Russian youths on the night of last year's referendum on joining Russia, he decided to move to Kiev, leaving behind his parents, brother and a heartbroken grandmother. "She cries every day on the phone. She misses me," he says.

While Kiev has been the destination of many Crimean transplants, the western city of Lviv -- home of Ukrainian nationalism -- has also seen a small influx.

Ernest Abkelyamov, a bearded man in his forties from Simferopol, says he chose the city of 700,000 because it was "the most Ukrainian city in Ukraine."

Dining with Abkelyamov on a traditional Crimean shurpa soup in a new Crimea-themed café Mustafa Bilyal, a father of six, accused Crimea's new authorities of persecuting the Tatars for their religious beliefs.

"For 23 years of the Ukrainian government did nothing to help us, but it also did not interfere. They let us build mosque and houses and start businesses", Bilyal says, vowing never to return to a Russian-ruled Crimea.

Sevgil Musaeva's parents are still deciding where their future lies. Like Budzhurov, the chief editor of Ukrainska Pravda news site was born in Uzbekistan to parents who also built a big home in Crimea -- a symbol of their rootedness -- and supported the pro-European street protests that ousted Viktor Yanukovych.

Separated from their 27-year-old daughter in Kiev, they feel abandoned by Ukraine's government, which appears to hold little hope of winning the peninsula any time soon, focusing instead on limiting its territorial losses to pro-Russian rebels in the eastern Donbas region.

"I think the Crimea question is not very important for them," Musaeva says. "For me Crimea seems a more important question for the international community than for Ukraine."

I think France is a weak reed for any Lebanese politician to lean on.