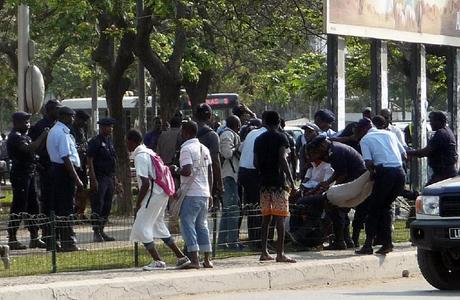 Human rights activists and journalists are increasingly being targeted by the regime of Angolan President Jose Eduardo dos Santos, a rights group said in a report Thursday, days after two activists were arrested in Africa's second-largest oil producer.

The International Federation for Human Rights (FIDH) who published the report along with an Angolan rights group AJPD, accused the government of resorting to harassment and intimidation to tackle any opposition.

"This situation must come to an end and Angolan authorities must accept dissenting voices," they said.

The report comes on the heels of the arrest of activists Marcos Mavungo and Arao Bula Tempo in the northern oil producing enclave of Cabinda on March 14, hours before an anti-government protest.

They have been imprisoned on charges of sedition.

Mauvungo, a former member of a group banned by Angolan authorities, goes on trial on Thursday.

Several rights organisations, including Amnesty International, have called for the immediate release of the two men.

In another case, journalist and anti-corruption activist Rafael Marques goes on trial on March 24 on charges of defamation after he published a book exposing corruption, torture and other human rights violations in the diamond mining industry.

"The procedural irregularities observed since Marques was indicted in January 2013 clearly show that he may not benefit from a fair trial," the FIDH report said.

The rights groups also expressed concern over the adoption of a new law regulating non-governmental groups which will give authorities greater control over their activities.

"The regulation, if adopted in its current form, might simply lead to the extinction of independent human rights organisations in Angola."

Following a brutal civil war which ended in 2002, Angola saw a decade of strong economic development boosted by its oil reserves but it was badly affected by the 2008 global financial crisis.

Since then, social unrest has been on the rise.

Demonstrations have been held with increasing frequency, with protesters demanding the resignation of Dos Santos -- already in power for 35 years -- while denouncing poverty, inequality, a lack of access to water and electricity, and failures in the health and education systems.