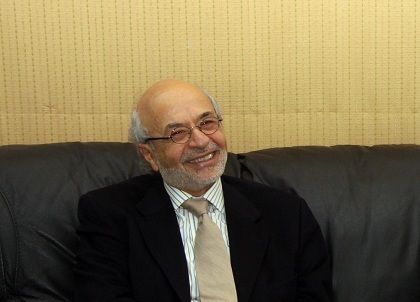 National Struggle Front MP Akram Shehayeb stressed on Monday that the bloc will not boycott the parliament, highlighting the importance of widening the centrists bloc instead of creating new ones.

“We have never boycotted the parliament,” Shehayeb said in an interview with An Nahar newspaper.

Shehayeb, who is loyal to Progressive Socialist Party leader MP Walid Jumblat, pointed out that the cabinet is seeking to avert the repercussions of the presidential vacuum.

“We are compelled to activate the work of the government,” the lawmaker told An Nahar, noting that the cabinet's mechanism, which Prime Minister Tammam Salam adopted, is based on a democratic process.

Earlier this month, the cabinet changed its working mechanism after it was hit by paralysis as a result of the veto used by several ministers.

The cabinet members agreed for regular decisions to be made by consensus and for decrees to be presented to the government for signature after being signed by Salam, the relevant minister and Finance Minister Ali Hassan Khalil.

These decisions were taken to manage the cabinet's affairs in the absence of a head of state.

The lawmaker continued: “No one has any interest in creating new blocs at the cabinet as the government is consensual.”

However, he said: “It is important to widen the centrist move that creates balance.”

Shehayeb reiterated the importance of electing a new head of state to “organize the work of the institutions.” However, he pointed out that the country can not go on without legislating draft-laws.

“Foreign and local interests are impeding the presidential vacuum and differences continue.”

Shehayeb considered that Jumblat is communicating with all parliamentary blocs to pursue them to end the presidential deadlock, underlining the importance of dialogue.

“It's true we have a presidential candidate... it's our democratic right... but we are not the ones obstructing the matter,” the Druze MP told An Nahar.

Aley lawmaker Henri Helou was nominated by Jumblat for the presidential race. The Druze chief continuously described Helou as a “voice of moderation.”

Concerning the ongoing dialogues between al-Mustaqbal Movement and Hizbullah and between the Lebanese Forces and the Free Patriotic Movement, Shehayeb said that the rivals must begin to tackle points of contention, at the forefront the presidential crisis.

He expressed hope that the dialogue (between the Christian parties) would ease the crises.”

“We respect any decision taken (by the political arch-foes), but we have our own convictions and stances... we agree to everything that doesn't contradict Lebanon's interest,” Shehayeb said.

The MP remarked that Jumblat approves the election of a presidential candidate who is not affiliated to either the March 14 or March 8 alliances, saying: “We need to agree on a consensual candidate.”

“Our candidate (Helou) is considered to fit the criteria... he could become a consensual figure,” Shehayeb said.