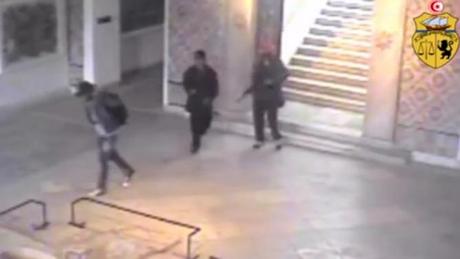 Tunisia said Thursday that it had arrested 23 suspects in connection with last week's jihadist massacre at the country's national museum.

"Twenty-three suspects including a woman have been arrested as part of a terrorist cell" involved in the attack, Interior Minister Najem Gharsalli told journalists, adding that "80 percent of this cell" had been broken up.

All of those arrested were Tunisians, he said, adding that another Tunisian, two Moroccans and an Algerian suspected of being members of the cell were on the run.

The Tunisian, Maher Ben Mouldi Kaidi, was previously identified as a suspect and is alleged to have provided the automatic weapons to the two gunmen who shot dead 21 people -- including 20 foreign tourists -- at the Bardo Museum in Tunis on March 18.

The head of the cell was among those arrested and was identified as Mohamed Emine Guebli.

But the minister said the operation was organised by an Algerian jihadist named Lokmane Abou Sakhr, one of the leaders of the al-Qaida-linked Okba Ibn Nafaa Brigade, the main Tunisian armed group active along the border with Algeria.

Officials called into question the claim of responsibility for the attack from al-Qaida's jihadist rival, the Islamic State group.

"Islamic State praised this attack for propaganda and publicity. But on the ground it was Okba Ibn Nafaa which belongs to al-Qaida in the Islamic Maghreb, that organised and committed this crime," interior ministry spokesman Mohamed Ali Aroui told Agence France Presse.

AQIM has not responded since IS claimed responsibility for the attack, which would be its first in Tunisia.

Tunisian authorities have blamed Okba Ibn Nafaa for a series of ambushes and attacks against security forces that have left some 60 dead since the end of 2012.

The 23 suspects are to appear in court later Thursday, Gharsalli said, without providing further details.

The minister said eight of the foreign tourists were killed as they got off a bus in front of the museum and 12 others inside the building. A Tunisian policeman was also killed.

The attack was the worst on foreigners in Tunisia since an al-Qaida suicide bombing of a synagogue killed 21 people on the island of Djerba in 2002.

Authorities are organising an international march "against terrorism" in Tunis on Sunday, similar to the one in Paris that followed the attacks earlier this year on the Charlie Hebdo satirical weekly and a kosher supermarket.

French President Francois Hollande is among those who have announced they will attend.

"I am calling on all Tunisians young and old... to take part in this march to show Tunisia's strength and its willingness to fight terrorism," he said.

The attack dealt a heavy blow to Tunisia's vital tourism industry as the country looks to rebuild its economy.

The birthplace of the Arab Spring revolutionary movement, Tunisia has seen an upsurge in Islamic extremism since overthrowing longtime strongman Zine El Abidine Ben Ali in 2011.

But Tunisia has taken pride in forming a democratic government since the Arab Spring -- in marked contrast to countries such as Egypt and Libya.