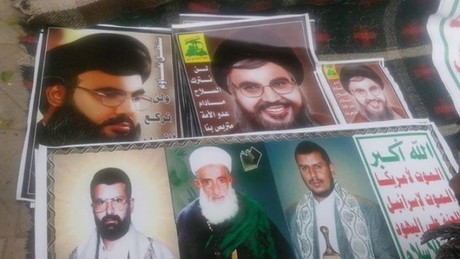 Hizbullah on Thursday called for an immediate end to what it described as the “Saudi-American aggression” against Yemen, a day before a scheduled speech by party chief Sayyed Hassan Nasrallah.

"Hizbullah strongly condemns the Saudi-American aggression that targets the brotherly people of Yemen, its national army and its vital institutions," a statement from the group said.

Riyadh has said it assembled a coalition of more than 10 countries, including five Gulf monarchies, for the military operation to defend Yemeni President Abedrabbo Mansur Hadi's government. Washington said President Barack Obama had authorized the "provision of logistical and intelligence support" for the campaign.

The military move against the Shiite Huthi rebels in Yemen triggered fury from Riyadh's regional rival Iran, Hizbullah's main regional ally, with officials in Tehran warning that the military action threatened to spill over into other countries.

Slamming “the participation of some Arab and non-Arab countries in this aggression and their political cover for it,” the party warned that “this Saudi-led adventure that lacks wisdom and legitimate and legal justifications is driving the region towards further tensions and threats that will affect its present and future.”

It described the military operation as “a blatant aggression against people seeking to obtain an independent decision, without hegemony from any state, whether regionally or internationally.”

Accordingly, Hizbullah called on “Saudi Arabia and its allies” to “stop this unjust aggression immediately and unconditionally.”

“This aggression secures the U.S. interests and gives a generous gift to the Zionist enemy and its choices,” the party added.

It also noted that “this brute aggression represents a chance for the sons of the Yemeni people to unite, show domestic solidarity and reach a comprehensive political solution that preserves their country and guarantees its unity and territorial integrity without any foreign interference.”

Later on Thursday, state-run National News Agency said Hizbullah chief Nasrallah is scheduled to deliver a televised speech Friday at 8:30 pm that will tackle "the latest developments in Lebanon and the region."

Hizbullah and its Huthi copy-cats call for the death of America and Israel yet all they do is kill their own arab brothers in Syria, Yemen, Iraq, and Syria.

Russian Cristhians must send militares to Lebanon to protect the Cristhianity in Lebanon! it´s oficial, by the last international movements of Hariri, that the saudi takfir gonna atack military hz in Lebanon with the help of Al-Nusra and Israel ! after the persecution of Cristhian in Iraque and Syria promoted by Qatar-Israel-Turkey and west friends...

@Vasco da Gama: How is portugal these days my friend?

Hey Norma/ita -iceman..nice to see you in your change of thobe!

how long before you know if KSA will accept you as a permanent resident
I hear they respect women & cross dressers like you...Best of luck with your application to your new found freedom land.

@the_toar
Hello, how are you today? I heard you got that promotion at KFC and found yourself an one bedroom apartment. I am so happy for you. I knew you could do it, so proud of you:)

Thank you thank you, Norma/ita -iceman....But I'm more happy for your new destination, where they love women & cross dressers rights.

I can just imagine you changing into diff thobes as you change from Norma/ita into iceman.

Not sure, maybe you can ask for me, since you know about payments for posting..

the sad thing is this troll really thinks he is a roaring lion:)))

You're about to fly with those wings on your GIF, right?

Hey kid are you in Portugal or a small island in Africa that happens to be Portuguese colony in the padt?

Hey kid are you in Portugal or a small island in Africa that happens to be Portuguese colony in the past?

The honorable Ansarallah fighters will fight back the Wahabis to the end. Their inspiration by Imam Khomeini R.A has risen to new heights. I am sure their spirit will succeed in the upcoming battle for a cancer free wahabi middle east.

Why are you so happy tex? This is what most decent folk were hoping for.

KSA to get involved directly....Lets hope they & Iran meet & sort this out.

Lets see who is willing to go all the way & who stands to lose more.
Keep it rocking KSA & please don;t stop.
Time for the region to change.

Mystic you have it all wrong. I understand that you can be against the wahhabis. No sane person can back the obscurantism of the wahhabis. However, the solution as to call for the shiite backed by iran to fight against the wahhabis is not the right way. First, Iranian wilayet al Fakih is using the dames methods of the wahhabis to maintain its power in Iran rather than opening up to a democratic regime. Second, the manoeuvres led by Iran supporting shia against sunnis can only lead to confrontation and antagonism among the sunnis and the shia. What we see today is the exact consequences of the acts of the iranian shiite revolution.
We need to have less extremism, we need to have a saudi that is more democratic and less extremist. But we also need a more democratic iran and especially an iran that is not conducting an imperialist policy in the region.

Mystic - Why do you not tell people the full title of Khomeini ... The miracle of God, the spirit of God, the supreme leader

But you supported the same thing in Syria, tex...now you want to protect the regime when it suits you?

Intellectual consistency is lacking with you & m14ers.

funny that M8 never supported the popular uprising in syria but support the houthis...

intellectual consistency is lacking even more with you and M8ers....

and iran also allied with al Qaeda in yemen to fight the gvt.... LOL

@Irani
I know you are tric Portugal
From the way you spelled Cristhian...lol
Congrats! you joined the club of frequent name changes...lol

"Hizbullah strongly condemns the Saudi-American aggression that targets the brotherly people of Yemen, its national army and its vital institutions,"

aren't the houthis who were attacking the yemen army ?

Hypocritical, as they are no better...what a joke. But, it's ok for their bretheren to overthrow the government there? And isn't that what you're doing more calculatingly in Lebanon? What's with you foreigners and your shameful ways.

houthis or ISIS are different sides of the same coin of extremism... and yet M8ers support the houthis...
meaning that M8ers support terrorists as long as they are with iran...

"This doesn't have much to do with the United States"... But FT Hizbullah calls it Saudi-American aggression, sorry to break this to you my friend but the United States and America are the very same.

By refusing to come to the negotiation table and using the air force to bomb Aden, Ali Abdullah Saleh and his Iranian sponsored Houthis allies crossed a red line. This should bring everybody to the table.

Irani - go and pull some trics in Portugal. Thanks God that most people in the region do not think like you.

Who do these governments think they are? A militia like Hezbollah who has a God given right to intervene - even in support of a monstrous regime like Assad.

That's what they say here in the west..but actually its

A good Muslim is a dead Muslim....don't change it.

past your bed time kiddo

Not just yet, Grandpa...watch your step on the way out & watch the door don't hit ya also.

the_roar you say grandpa as if it was a bad word

Isn't amazing how garbage like you live in the west and enjoy the quality of life the west provides you and your loved ones yet you criticize the west every chance you get, Iran is a better destination for people like you.

when the Lebanon Army join forces to fight with the Syrian Arab Army the takfir Killers of the Cristhians in Levant !!!??

The houthie militias failed so bad in Tikrit, they have been pushed aside as a condition of begging for help from Amrika.

Nasrallah complaining about :Aggression", I find that funny. The peace loving Nasrallah never exhibited any aggression towards anyone. He always preached if your enemy slaps you on one cheek turn the other cheek.

Hezbollah does make interesting declarations, like the one concerning the latest developments in Yemen, yet Hezbollah seems more content with keep continuing what it's doing, meddle in Syria, meddle in several other countries. Hezbollah also does not seem to be bothered by Iran's role in the Middle East nor does it have the tongue to say anything either. But when anyone opposes Hezbollah or its Iranian patron, the books of accusations will fly wide open. Well, in Yemen it was only a matter of time for the Gulf States to react and now that they are reacting, we are seeing how much firepower they can deploy in no time. However, having said that does not preclude the fact that the Middle East is now entering an extremely delicate and difficult stage, the wild elements of war can never be predicted no matter what, except to fear the worst.

To Hassan NAZiRael: the most terrorist animal in the world: Shut up