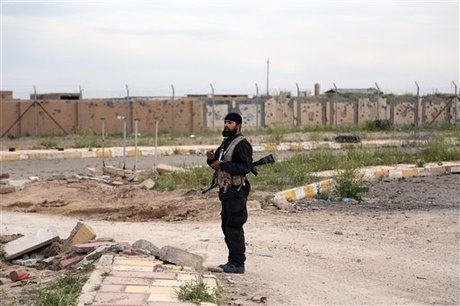 Iraq's Shiite militias have withdrawn from the forefront of an offensive to recapture Tikrit from Islamic State jihadists, allowing Baghdad government troops to take the lead, a top U.S. general said Thursday.

The Shiite militias "have pulled back from that area" and Iraqi special forces and police are clearing Tikrit, General Lloyd Austin, head of U.S. Central Command, told lawmakers.

Austin confirmed previous comments by officials that a U.S. condition for air strikes against the IS group in Tikrit was that the Iraqi government be "in charge" of all forces in the assault on the town.

The four-star general said the offensive to take back Tikrit launched on March 2  "stalled because the wrong approach was taken" and that some of the forces in the operation were "not supervised" by the Iraqi government.

Now the offensive "will move forward," he said.

Washington says Iranian military officers have provided advice and artillery to Shiite militias involved in the operation. And the White House has been dismayed by Tehran's prominent role in the assault, which was launched more than three weeks ago amid triumphant statements from Baghdad.

But as the offensive bogged down in recent days, President Barack Obama's administration seized an opportunity to exert U.S. influence when Baghdad issued a request for American air power.

There may be Shiite militia forces on the east side of the Tigris river but Iraqi government troops were deployed on the western side of the river to seize control of Tikrit, he said.

Austin said he did not believe Qassem Soleimani,  commander of the Quds force, the foreign operations arm of Iran's Revolutionary Guards, who has been a key adviser for Iraq's Shiite militias, was in the area any longer.

U.S.-led warplanes carried out 17 air strikes against IS jihadists in Tikrit overnight in the first wave of coalition bombing raids in support of the Iraqi government offensive, officers said Thursday.

U.S. and allied fighter jets, bombers and drones struck a building, two bridges, three checkpoints, two "staging areas," berms, an IS "roadblock" and an IS command facility, the U.S. military command in charge of the air campaign said.

"The ongoing Iraqi and coalition air strikes are setting the conditions for offensive action to be conducted by Iraqi forces currently surrounding Tikrit," Lieutenant General James Terry, commander of the coalition war effort, said in a statement.

"Iraqi Security Forces supported by the coalition will continue to gain territory from Daesh," said Terry, using the Arabic acronym for the IS group.

Pentagon officials said the air strikes would continue in Tikrit, and France said it had joined in the bombing raids.

Thousands of Iraqi soldiers, police officers and paramilitary forces have been deployed to retake Tikrit, which is being ferociously defended by IS fighters who have booby-trapped streets and buildings in the city with bombs.